Susan Musgrave adds a cookbook to her literary menu. 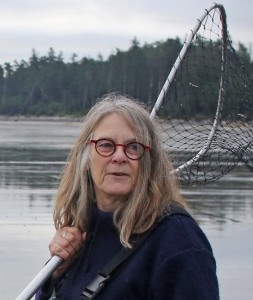 Susan Musgrave includes crab catching in her duties as a Haida Gwaii B&B operator in Masset.

Susan Musgrave has veered away from everything safe in her life, even now as the proprietor of Copper Beech House, a seven-sided bed-and-breakfast on Haida Gwaii.

It’s from her home on the Sangan River,  in the community of Masset that the poet, editor, novelist, critic, essayist and humourist Susan Musgrave has foraged the ingredients for her new literary feast, A Taste of Haida Gwaii: Food Gathering and Feasting at the Edge of the World (Whitecap Books $34.95).

Readers will be able to savour recipes for Shipwrecked Chicken Wings, a famous politician’s Rustled Beef By Gaslight, and learn how to bake her coveted sourdough. Served up, too, will be the tale of a local fisherman who offered an exotic dancer 50 pounds of shrimp to spend the night with him.

“Our mistakes make the best stories, and that’s why we should not think of them as failures,” says Musgrave.
Nobody should be surprised by Musgrave’s foray into food writing, for she has long embodied the maverick writer who is more attuned to Haight-Ashbury than Yonge and Bloor, a chef of sorts of the unclassified, non-university coddled, B.C. literary tradition. After all, her apprenticeship began when she dropped out of high school and ran away from home at the age of 14. She married a criminal lawyer in the mid-1970s only to run off to Mexico a few years later with a man who was accused and then acquitted of smuggling drugs. She divorced him and fell in love with the convicted bank robber and writer Stephen Reid who was sent back to prison after a 1999 heist, car chase and shootout in Victoria.

They have remained married.

It was in 2010 that Musgrave bought from David Phillips the Copper Beech House, the former residence of a cannery manager that was moved to its current site in the early 1930s.

Inside, heirloom-quality furniture has been replaced with the kinds of things Musgrave says guests can sink into, and a glass curio cabinet displays soapstone geese, an ivory tusk, a rodent skull and a plastic smurf.

Covering the walls are the works of Haida artists, an African penis gourd, antique fishing rods and a sardine can depicting The Last Supper.

“I can’t say I was cut out to be an innkeeper,” says Musgrave. “I feel uncomfortable most of the time, charging people for a place to lay their head.” Perhaps, it’s because, as Musgrave says, her father would charge, “you’re so useless you can’t boil an egg,” every time she began to prepare a meal as a child.

“At Copper Beech House breakfast is often a leisurely all-morning-long event,” she writes. “If there are more than four guests we don’t set the table—everyone sits in the living room with a plate on their lap. The informality leads to wonderful stimulating conversations and lets our guests get to know one another without having to worry about which knife or fork to use, or if they spilled stewed rhubarb on the white tablecloth.

“We serve what I have humorously taken to calling an Off-the-Continental Breakfast (Haida Gwaii is about 100 km (60 miles) off the coast of Canada, as Islanders like to say when they refer to mainland British Columbia) which includes many kinds of coffee, every kind of tea, orange juice laced with elderflower cordial, fresh fruits (including local wild berries, when in season), homemade granola, yoghurt and Susan’s 3-day Sourdough Bread… Guests usually go for the bread, partly because it takes me so long to make they would feel guilty if they didn’t eat it, especially after I have reminded them of all the time and effort involved.” 978-1770502161