An intimate circus of vulnerability 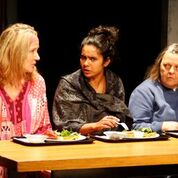 When a cast is this strong—including Nicola Cavendish, Diane Brown, Sereana Malani and Colleen Wheeler among the six suicidal women who are coping with despair in an expensive care facility that women attend by choice—and the writing by Pamela Mala Sinha is so deeply felt and beguilingly intelligent—expanding on a personal grief she expressed in her one-woman show CRASH, performed at The Gateway a few years back—the most  important thing to say about Happy Place, directed by Roy Surette, is that you will be missing something very, very fine by not seeing it.

It’s about vulnerability. There but for the Grace of God, etc… The title refers to rehabilitation attempts wherein patients are encouraged to think of things that make them happy—to no avail. We buy into these women marooned on the sidelines of life from the get-to.

Cavendish as the wisecracking, foul-mouthed and dishevelled Mildred leads the way. She was raped when she was young; later a drunken doctor botched a hysterectomy; she successfully sued for one million; then she tried unsuccessfully to down a bottle of Javex.

Brown is equally credible as a dimwitted and dazed Mary Kay representative, Joyce, shuffling around in her slippers, asking irritating and invasive questions, crippled by a seemingly inexplicable sadness. Joyce is cheerful on the surface, but at the same Brown manages to convincingly exude a ghostly lassitude for her character that will be immediately identifiable to anyone who has spent ten minutes in any long-term care facility.

In contrast to them both, Malani as Celine, a strong woman of prideful dignity who was raped twice, offers a deeply-grounded presence not dependent on histrionics. Less self-absorbed than most of the other characters, she provides a complex portrait of someone who uses her intelligence to help others who are freaking out in their leaky lifeboat adrift on stormy seas.

As a latecomer to the facility, Wheeler, as Rosemary, is grieving the loss of a son who was not biologically hers after her husband left her for another woman. At first, she attempts to manoeuvre within the facility with her aloofness as a rudder until she, too, accepts camaraderie can be a survival tactic as necessary to wounded women in a suicide prevention clinic as it is to soldiers in a foxhole. 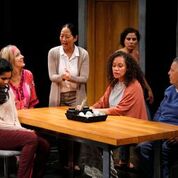 Younger cast member Adele Noronha as Samira has the task of portraying Samira, the sexually brutalized character who is trying to piece together a horrific rape that echoes the story in CRASH, and Laara Sadiq as Nina must depict the least appealing character, a delusionary patient who insists on pretending she is pregnant. Donna Yamamoto is solid as their determined, sympathetic multi-faceted caregiver/recreational therapist.

Don’t be deterred by these thumbnail summaries. Happy Place is actually uplifting because it’s fueled by compassion. We pay very close attention to each (usually very short) scene because clues that gradually reveal storylines are dropped like a trail of bread crumbs. Increasingly it’s a challenge for the audience to keep track of the six tales of suffering, so this is not a play designed to make you weep. Our involvement is more intellectual than emotional.

When the spitfire Mildred checks herself out of the facility, early in the second act, the play loses some of its momentum, and repeated attempts to indicate sliding shrubbery overhead amount to little more than a distraction, but overall this qualifies as a must-see show for anyone who wants to be able to say they’ve seen all the best Vancouver productions of 2017.

All over the planet there are institutions trying to comfort and possibly heal women dealing with trauma, much of which has been incited by men. We don’t see this work, and we don’t generally want to detour into this sub-culture unless it’s a loved one or a close friend. Pamela Mala Sinha and this production merit gratitude and praise for making this theatrical journey into the living hell of six women’s lives feel like a privileged intimacy.

I guarantee that last sentence will make sense and ring true if you see it.