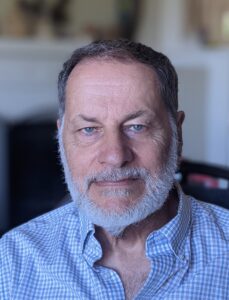 It’s 2007, and Sandra Treming is released from prison, having served 25 years on a terrorism and murder conviction stemming from her involvement in the “Berkman Brigade,” an early 1980s political activist group in Mark Vulliamy’s debut novel, Through Thorns (Iguana Books $26.49). Free from prison, the aging revolutionary now finds herself in a strange new world of cellphones, laptops and smoking bans; her old political pals have moved on to other pursuits. Sandra must navigate through abusive authorities, religious zealots, petty thieves and unscrupulous property developers before a chance encounter with the owner of a used book store opens the door to a new life. Mark Vulliamy holds a BA hons English and an MA, Sociology. Throughout his twenties he lived in a series of communal houses, supported by intermittent gigs with mainly grant-funded theatre groups. In 1977 he found temporary work at a City community centre. ‘Temporary’ soon became permanent employment, and he retired 32 years later as a planning manager for the Vancouver Park Board. In retirement he has returned to writing plays and other forms of fiction. Through Thorns is his first novel. 978-1-77180-503-2

2 Responses to “An aging revolutionary”