Coincidental with a feature review in The New York Times, Aislinn Hunter’s The World Before Us (Doubleday) has received the Ethel Wilson Fiction Prize. 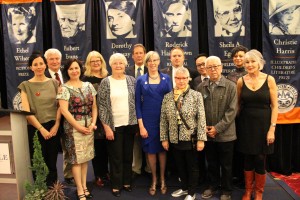 Hunter’s novel was reviewed eight months ago in BC BookWorld. “This is a book about affection, ” she said. “…Our time on this earth can be fleeting. Love while you can.”

Aislinn Hunter acknowledged the strength of her fellow nominees (“If there was a butterfly that flapped its wings in Mexico any differently on a Tuesday, any one of you could be standing here.”) and she thanked her editor, Lynn Henry (“the editor of my life), her mentor, Jack Hodgins and her husband who has never said to her, “Maybe you should take more teaching courses.”

As co-editors, marine scientists Richard Beamish and Gordon McFarlane took home the coveted Roderick Haig-Brown Regional Prize for best book about B.C. with The Sea Among Us: The Amazing Strait of Georgia (Harbour). “This book is about the Strait of Georgia,” said Beamish. “We have an incredible eco-system that very few people know anything about. I think it’s the first time any book has been written about a marine eco-system anywhere in the world. We want people to understand the complexity.”

Eve Joseph won the Hubert Evans Non-Fiction Prize for her multi-faceted In the Slender Margin: The Intimate Strangeness of Death and Dying (HarperCollins). She thanked her publisher for allowing her to write an exploratory work on the subject, as well as her partner, poet Patrick Friessen.

Aaron Chapman primarily thanked former Commodore club owner Drew Burns when he received the Bill Duthie Booksellers Choice Award, along with his publisher, Brian Lam, for Live at the Commodore: The Story of Vancouver’s Historic Commodore Ballroom (Arsenal Pulp). Lam made reference to the fact that either Harbour or D&M titles have won this prize more than half the time since 1986. Sechelt-based author and mentor Betty Keller was humble to a fault when receiving her Lieutenant Governor’s Award for Literary Excellence from the Honourable Judith Guichon. Keller is most widely known for having started the Festival of the Written Arts in Sechelt, the first ongoing literary gathering of its kind in B.C. “She is one of those rare writers who has put more effort into enabling and promoting other writers than into her own cause,” said publisher Howard White. “Her contribution to letters in B.C. has been huge, and until now, mostly unsung.” Bill Richardson epitomized dignity and aplomb, avoiding self-referentialism, as the only person to have hosted the B.C. Book Prizes four times. CBC-affiliated hosts emcee the gala about half the time. Multiple appearances over the past 31 years as host have been made by Susan Musgrave (3), Vicki Gabereau (2), Bob Robertson of Double Exposure (2) and Charles Demers (2).

Of 35 titles nominated this year for seven prizes, there were 26 nominations for women; 17 for men.

The BC Book Prizes were established in 1985 to celebrate the achievements of British Columbia writers and publishers. The prizes are administered and awarded by a non-profit society that represents all facets of the publishing and writing community.

Harbour Publishing had six nominations; HarperCollins from Ontario had four; Caitlin Press of Halfmoon Bay and Kids Can of Ontario had three each.