A surprising MOA exhibit looks at calligraphy new and old, including graffiti art, both digital and dangerous. 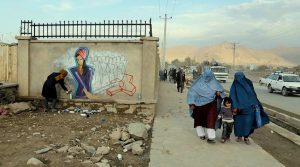 A rare image of Kabul activist Shamsi Hassani at work on a mural in public view.

Shamsia Hassani of Kabul uses her illicit street art to alleviate the trauma of war.

The gist of an exhibition (May 11 to October 9) at UBC’s Museum of Anthropology that explores the practice of calligraphic art, Traces of Words: Art and Calligraphy from Asia has been condensed into a 176-page book with the same title.

One of the most courageous artists in Traces of Words is Shamsia Hassani, who has been called the first female graffiti artist in Afghanistan. Not yet 30, she spray paints over structures ravaged by war in her home city of Kabul. “Dreaming Graffiti” (2012). The text at the bottom of the painted female figure reads: Like me (looking like me).

Given the suppression of women in many parts of Afghanistan, Hassani frequently cannot visit sites that interest her. Instead, she creates what she calls “dreaming graffiti” by painting graffiti on photos of places she would like to visit. Dreaming Graffiti (2012), above, is one of these circumstances where Hassani painted on a digital print of a photograph taken in Kabul. If one was to visit this site, there would be no graffiti on the walls.

What about the Dead Fish? is a photo of real graffiti spray painted by Hassani of floating fish and a burka-clad woman on a shot-up, crumbling masonry wall. The woman appears to be seated on the actual steps. The spray painted words beside the female figure read: “The water can come back to a dried-up river, but what about the fish that died?” Historical artifacts featured in Traces of Words include Sumerian cuneiform inscriptions (some of the oldest writings in the world), Qur’anic manuscripts, Chinese and Japanese calligraphy, calligraphic tools, as well as ceramic bowls, inkpots, and enamel incense burners marked with calligraphy.

Modern pieces tap into digital and interactive representations. For instance, a digital installation called What a Loving, and Beautiful World, from Japan’s teamLab—a collective that calls their members, ultra-technologists—is a 360-degree, computer-generated projection that lights up the walls of the gallery. When the shadow of a museum visitor touches one of the projected characters on the walls, the world of that character comes to life and new events occur in real time. The worlds created, as in nature, have no two identical moments.

It is not commonly known that the UBC Library has one of the few major collections of pre-modern Asian books and manuscripts outside of Asia. The Council on East Asian Libraries ranks UBC’s Asian Library among the best in the world. And MOA itself holds a large collection of Asian artifacts—18,000 items. In a combination of both institutions’ collections, there will be an off-site exhibit at the Irving K. Barber Learning Centre in addition to the MOA exhibits.

Words, according to curator, Dr. Fuyubi Nakamura, “are physical traces of time and space” that embody what is ephemeral and eternal in life.

“We leave traces of ourselves throughout life, be they visible or invisible. Words, whether spoken, written, imagined or visualized, are traces unique to humans.” “What about the Dead Fish?” (2011). Spray cans in photo signal Hassani made actual graffiti vs ‘dreaming’ graffiti.