A “Viking” goes to Vancouver Island 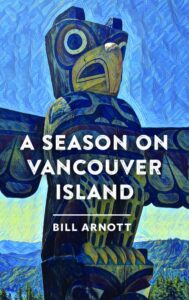 A Season on Vancouver Island (RMBooks $20) by Bill Arnott

First things first. This is a part of the world that I love. Vancouver Island and its surrounding archipelago, British Columbia’s Gulf Islands, remain one of the planet’s most magical regions. When RMB publisher Don Gorman asked if I’d write a memoir about time spent here and include original visual art, not only was I delighted, but eager. Truth be told, I’d have created it anyway. Only now we can experience it together. Which is an incredible privilege, sharing vignettes and digitally painted photos, discovering new and familiar sites: forest, sea, the lands of Indigenous Nations. I’ve included a note as to names and transliteration, doing my best to accurately relay regional narratives. The result, I feel, is a time-bending present-day journey, imagery of place and people, recollection of past while glimpsing the future. Meanwhile the star of this show, the Island, in fact each island and coast, continues to reveal remarkable, intimate secrets. It’s a sensory excursion I’m grateful and pleased to share.

A feeling of departure, and possibility

Ten thousand horses rumble to life. With a diesel vibration, water churns into chop and a blue and white ferry shoves us into the strait, in the direction of Vancouver Island. On the other side of the water, Nanaimo. Snuneymuxw. Coast Salish land. A sense of connection is what I feel, gazing through open steel portals. The horses pick up their pace, trot to canter, as a ripple ricochets through rivets and railings. The result, a feeling of departure, and possibility. 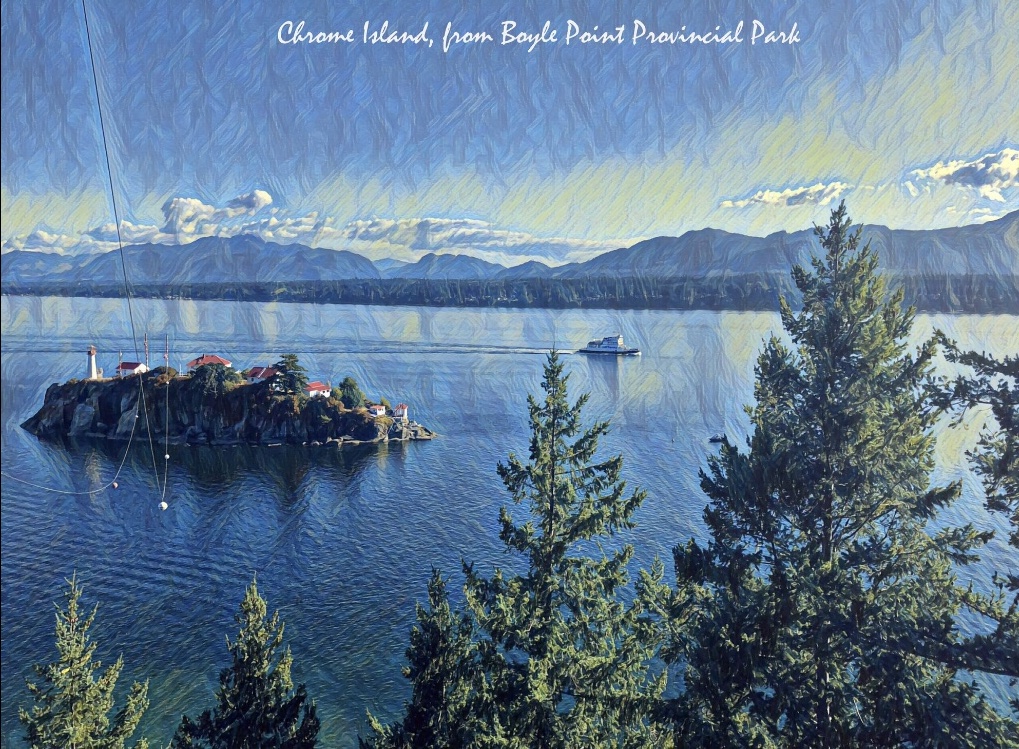 It’s what I felt as a child, venturing into hills behind our home on a north arm of Okanagan Lake, bubbles of land carved by glaciers, the big lake fed by a narrow, deep creek. It was that sense of departing on a grand adventure that’s never gone away, each time I’m off somewhere new. Even places familiar, for that matter, seen for the first time again. As a kid I’d pick a stick from the deadwood, pry my way through barbed wire like a wrestler entering the ring, and climb. Over the hill cattle grazed, and the land beyond that was orchard. It always smelled dry. Of course, I’d take care, watching for cow pies, rattlesnakes and undetonated mortars. An army camp was across the lake, and a few decades ago the arid grass banks served as target practice, bombs lobbed across the water.

Now, aboard a westbound ferry, the day’s rolling out somewhat dreamily. The ferry is full, the first at capacity in months, and the crew’s a bit overwhelmed by an onslaught of passengers awaiting their Triple-O burgers, like kids released into summer following a particularly miserable winter. A winter that’s lasted two years.

Our vehicle is on an upper deck berth aboard the MV Queen of Cowichan and we’ve chosen to stay put, hunkering in our well-worn car with the aroma of road trips, fast food, and bare feet. Meanwhile, Horseshoe Bay’s showing off its photogenic cliffs and arbutus, copper-pistachio peelings of bark as though they’ve been outdoors too long, overdue for a coating of sunscreen. Bowen Island rises from sun-dappled water like a child’s likeness of a surfacing whale, a round hump of a back, the only things missing being flukes and a blowhole waterspout. Sounds and smells mingle, wafting amidst cars: cell phone chatter, sneaky second-hand smoke, laughter, coffee, the vibrating bass of ferry engine, and the inevitable bleat of a car alarm, its owner nowhere to be found. 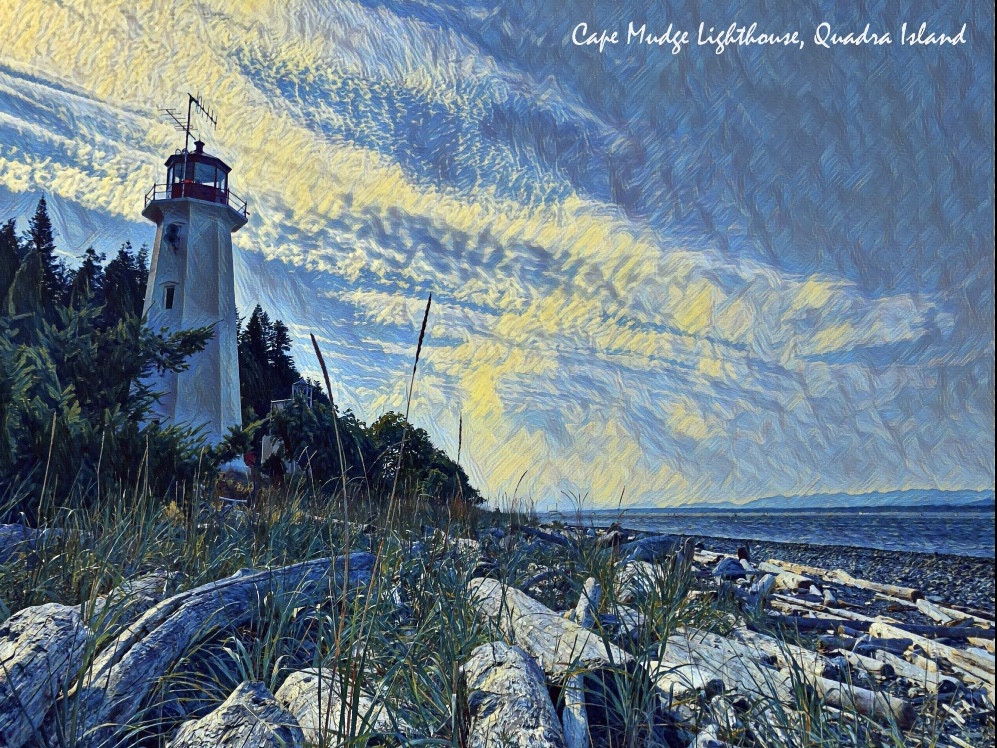 Tatters of cloud stream past as we venture west by southwest. Midway across the Salish Sea we pass our doppelganger going the opposite way, the visual striking. A weather front’s hanging in place at the halfway point of the crossing, a vertical line of rain and smudgy dark cloud, monochrome seascape in a rinse of blue-grey. I watch the ferry pass through the wall of weather, easing from dark to light, like Dorothy stepping from blustery Kansas to the technicolour of Oz. Unbeknownst to me we’re making our very own leap through a time-bending lens, as we’ve come for five weeks, but will go home in three months from now. 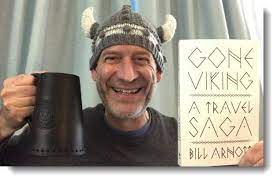 About the Author: Bill Arnott is the bestselling author of Gone Viking: A Travel Saga, Gone Viking II: Beyond Boundaries, and A Season on Vancouver Island. He’s been awarded by the ABF International Book Awards, Firebird Book Awards, Whistler Book Awards, received The Miramichi Reader’s Very Best Book Award for nonfiction, and for his expeditions Bill’s been granted a Fellowship at London’s Royal Geographical Society. When not trekking the globe with a small pack and journal, or showing off cooking skills as a culinary school dropout, Bill can be found on Canada’s west coast, making music and friends. @billarnott_aps

Author’s note: I chose to share this particular excerpt as it introduces us to the book, how and why it came into being, its central premise and content, along with the inclusion of original visual art. The introductory passage sets a narrative tone – inclusive travel memoir – while honouring regional history, people and place, experienced through fresh observation, wonder, and gratitude. 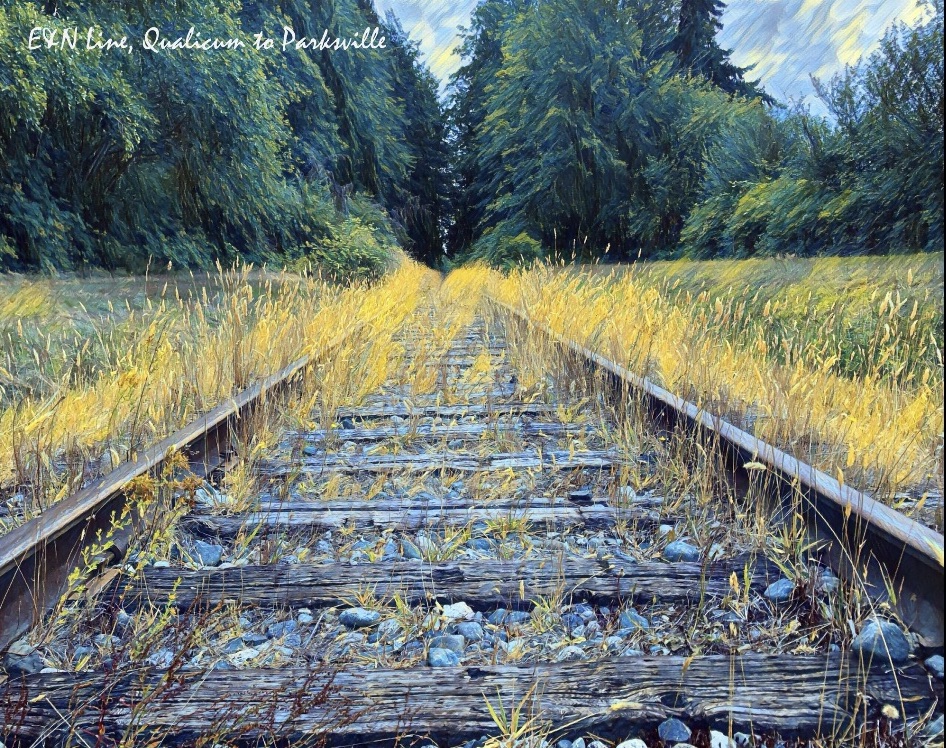 One Response to “A “Viking” goes to Vancouver Island”