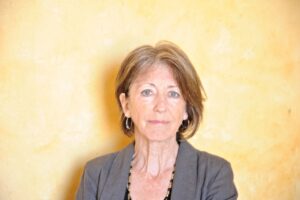 In Pauline Holdstock’s ninth novel, Confessions with Keith: From the Journals of Vita Glass (Biblioasis $22.95) a mother and writer goes through a mid-life crisis at the same time as her husband, as told through her journal. The story has its roots in Holdstock’s life. “I did actually keep a journal through some of the rocky years of raising a family and this voice began to creep in,” says Holdstock. “It was Vita’s voice, this sort of pretense of being in control. Rather than sitting down at a desk to open a journal and bursting into tears, which I could have done at times, I had this persona of Vita who would look at things as if it was all perfectly manageable. And so, I got quite fond of Vita and used to make a point of writing in her voice and that would entertain me.” Years later, Holdstock re-read some of her journals and realized she had the framework for a novel. “Vita could have all sorts of adventures and misadventures within this framework. So, I started working on that.” The novel is due out in September. 9781771964975