A touch of kindness in Pomerania 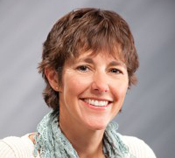 Written from the perspective of seven-year-old Gerda, A Year of Borrowed Men (Pajama Press $21.95)  by Michelle Barker (at right) is the true story of survival after Hitler’s army had “borrowed” all the men in her family for warfare. Gerda can’t fully grasp why three French prisoners-of-war who have been sent to work on their family farm as labourers cannot be invited inside from the barn for just one meal. Michelle Barker’s mother was forced to vacate the family farm in Pomerania after World War II.

“I don’t know if the farm still exists but I hope to go and find out. My mother told me that her eldest sister did go back once, after the Germans were allowed to travel there. It was still a farm at that point but was somewhat rundown. That would have been quite a long time ago.”