A raven in Xsan 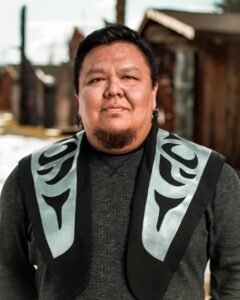 Gitxsan member, Hetxw’ms Gyetxw, also known as Brett D. Huson has published the sixth title in his award-winning series ‘Mothers of Xsan.’ The Raven Mother (Highwater $24.95) follows Nox Gaak as she teaches her raven chicks how to survive along with the help of her flock. Ravens have many roles, both for the land (being important to their ecosystem) and in Gitxan story and song, which Huson describes for readers in grades 5 – 7, although the books can be used for younger children too. Huson has worked in the film and television industry for over 13 years and specializes in connecting science and Indigenous knowledges through writing and academic work. With illustrations by Natasha Donovan, Huson’s new title combines a wealth of information about the life cycle of ravens.  9781774920039