Maureen Brownlee's deeply-felt debut novel, Loggers' Daughters (Oolichan $19.95), is a realistic story that could have been set in the Ozarks. Women's work inside the house and on the ranch or hobby farm is insufficiently valued. 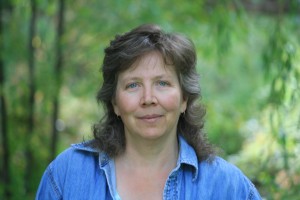 Maureen Browlee, a former publisher of The Valley Sentinel, launched her novel at the Caribou Grill in Valemount and at the McBride Library. Margaret Laurence would have approved.

Imagine being born somewhere north of Quesnel, deep in the inland rainforest of the Rocky Mountain trench, back in the early ’40s, back when BC Rail was still called the PGE and everyone called it Please Go Easy.

Everything you know about your parents comes from snippets of conversation you weren’t meant to hear. Your grandparents died in a collision with a train, and your mother inherited the farm that is your childhood home; your father was specifically excluded, a continuous source of acrimony between your parents. Then your father, injured in a bush accident, loses his source of income (and pride) and becomes a very heavy drinker.

You’ll never know for certain, but maybe it is the bar bills at the local hotel that one day persuade your parents to give you up to the local hotel owners, a German couple, or maybe they are Austrian, and so you never get past the tenth grade. Maureen Brownlee can run a tractor and a newspaper.

Quite likely this manuscript has endured previous incarnations. No matter. It is now a mature work. For those old enough to remember a Canadian writer named Margaret Laurence, it can be likened to an old fashioned Margaret Laurence novel. If you are not thirsty for mere cleverness, if you can appreciate instead how each anecdote has been forged from experience, you will never forget the protagonist, Adare Wilkins, in much the same way you will always recall the likes of Hagar Shipley in The Stone Angel or Rachel Cameron in A Jest of God.

Maureen Brownlee grew up in Dunster and went to school in nearby McBride in the Robson Valley. She lived in Arrow Lakes and Prince George before moving to Valemount (also in the Robson Valley) where she founded and operated The Valley Sentinel from1985 to 1994.

Brian Fawcett, who left his hometown of Prince George at age twenty-two, has recently written his own novel about central B.C. with a similarly prosaic title, The Last of the Lumbermen (Cormorant $21.95), examining much of the same territory from a male perspective.