The Doctor is back 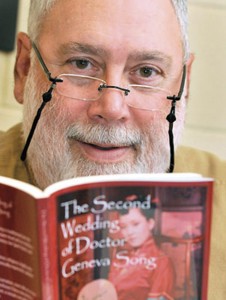 A civil rights lawyer in Richmond, Robert Friedland has had two stories selected to be read on CBC’s The Vinyl Café and he has thus far published three works of fiction, starting with a collection of short stories, Faded Love, recently republished in China by New World Press of Beijing. Established in 1951, NWP is touted as one of the largest book publishers in China. The heroine of Friedland’s first novel, The Second Wedding of Doctor Geneva Song (Libros Libertad $20), was introduced as a sexually adventurous family physician who marries outside her Chinese culture. As well, her childhood friend, Deri, overcomes her upbringing in remote northeast China to become a devout Buddhist nun, a concubine and the most powerful woman of finance in Canada. Friedland’s portraits of these two provocative women in contemporary B.C. are audacious, intelligent and fanciful, spiced with murder and sex–barely recognizeable as Canlit–and are continued in his new novel, a sequel, The Tragic Marriages of Doctor Geneva Song (Libros $20). Once again the characters wrestle with ancient beliefs and modern bodies. 978-1-926763-17-0