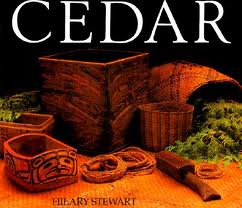 It is with sadness we must note the passing on June 5 of the renowned BC artist and author Hilary Stewart, author of more than ten titles including Cedar: Tree of Life of the North West Coast Indians and the perennial bestseller Looking at Totem Poles. Stewart. of Quadra Island, was an important authority on Northwest Indian art and culture, starting with her Artifacts of the Northwest Coast (1973) and Indian Fishing: Early Methods on the Northwest Coast (1977). Her Cedar (1984), an examination of the various ways Aboriginal cultures utilized cedar, received one of the first four B.C. Book Prizes that were presented in 1985. Stewart’s reiusse of the journal kept by English sailor at Nootka Sound in 1803, John R. Jewitt, Captive of Maquinna (1987), also received a B.C. Book Prize. Other titles included Robert Davidson: Haida Printmaker (1979).

Hilary Stewart was born in St. Lucia, West Indies, on November 3, 1924. After attending boarding school in England, she spent six years in the armed forces, during and after the war. Upon completing studies at St. Martin’s School of Art, she followed her brother, Peter, to Canada in 1951. She worked as an artist for CHEK TV and became increasingly fascinated in the art, artifacts and cultures of the First Nations peoples of the Pacific Northwest. Long associated with the Archaeological Society of BC, she produced twelve books. Stewart lived for many years on Quadra Island but was forced to move to Campbell River after a stroke. She spent the last five years of her life in a nursing home in increasingly frail health. She died on June 5, 2014. Hilary Stewart was pre-deceased by her brother Peter and her sister Heather. She is survived by her sister in-law Anna Stewart, her niece Robyn Stewart and her nephew Ian Stewart. “Hilary Stewart was one of those unique talents who was equally distinguished as a writer and a graphic artist,” said her final publisher, Howard White. “Her keen study of aboriginal cultures of the BC coast led her to make a major contribution to popular understanding.”

In lieu of flowers for a a celebration of Stewart’s life on June 21st, at 1:30 pm, at the Quadra Island Community Centre, friends and admirers are urged to make a contribution to the “UBC Museum of Anthropology” for the Hilary Stewart Endowment Fund for First Nations Education Programs.