A little-heralded classic — from Lytton 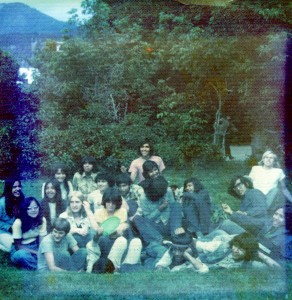 We vote for  Don Sawyer’s Where the Rivers Meet, now into its tenth printing.

First published by Pemmican Publications back in 1988, Don Sawyer’s Where the Rivers Meet is perhaps the first Canadian book for young readers that realistically portrays racial prejudice and teen suicide in a First Nations community.

“I would like to acknowledge how much I really enjoyed your novel Where the Rivers Meet. This novel was the only book I’ve ever read and actually finished.” – a reader in Merritt

Set in a fictional community alongside the confluence of two different-coloured rivers (i.e. the Thompson and Fraser Rivers), Where the Rivers Meet realistically depicts First Nations students, chiefly Nancy Antoine in grade 12, who are frustrated by largely irrelevant schooling. Angered by the preventable deaths of her people on an unsafe bridge, Nancy turns to her First Nations’ traditional culture for sustenance. After undergoing a puberty rite called ssqualmach, Nancy returns to her school and successfully agitates for changes in its curriculum. Some of the proceeds from this book were donated to the Lytton and Mt. Currie Stein Preservation Fund and the Stein and Cultural Heritage Rediscovery Society.

“I had become fed up with a publisher back east,” recalls Sawyer, “who had originally said they wanted the book. Then I was told to rewrite the story and advised, ‘If you took out all the analysis, this would go a long way to making the story work better.’ I was also told the characters ‘talk in too adult a manner and the insights are too well articulated’ and ‘the plot is a real problem…it has two centres.’

Don Sawyer taught in Lytton for two years, 1973-75. For an educator who had worked in high schools for more than ten years, Sawyer found the following comment particularly condescending: ‘There are many beginning writers setting their stories in school… It won’t do; he’ll have to dig deeper into his imagination and experience and find something stronger, more original.’

A related comment from yet another reader complained, ‘too much of what is wrong at school is put on Indian-ness when in fact, it’s a situation that affects both natives and whites alike.’

In the mid-1980s, there arose a good deal of nervousness and sensitivity about depicting First Nations characters, generating a narrow fastidiousness identified as “appropriation of voice.” (The two writers most targeted in B.C. were also two of the best: Anne Cameron and W.P. Kinsella.) Sawyer’s editor back east questioned the authenticity of the cultural material, even though he had done enormous ethnographic research and interviewed the late Neskonlith elder Mary Thomas for more than four hours to insure authentic voice. Mary Thomas was an advisor for Don Sawyer’s Where the Rivers Meet, now into its tenth printing.

Ethnobotanist Mary Thomas was born in Salmon Arm in 1918. Much-recognized as a teacher for her knowledge of Shuswap history and customs, she was honoured in 2010 by the preservation of 490 hectares in the Wap Creek valley known for its spiritual and traditional use values. Sawyer used some her comments verbatim in the text and Mary Thomas wrote a letter of endorsement of the story. The interview tapes between Sawyer and Mary Thomas are now owned by the Neskonlith First Nation and are highly regarded as one of the few extensive explorations of the Shuswap spirit quest.

In short, the incidents in Sawyer’s book were accurate portrayals of life in many native communities, revealing how social bigotry and injustice played out with particular clarity in our culturally-bound schools.

“But they didn’t get it,” said Sawyer.

In exasperation, having tried to accommodate his Ontario publisher for nearly two years, Sawyer sent the manuscript to Pemmican, who had published tough, authentic accounts of First Nations life such as In Search of April Raintree by Beatrice Culleton.

“They embraced the book immediately,” he recalls, and the publisher at the time, Virginia Maracle, phoned within a few weeks to express their enthusiasm. I then worked with editors Stan Manoakeesik and Beatrice Culleton, who had succeeded Virginia as the manager of Pemmican.

“When the book came out, it got great reviews. That was back in 1988 when papers actually reviewed books. Most gratifying were the sales, the vast majority of which were to predominantly First Nations schools across Canada.” According to Sawyer, the first six printings, from 1988 to 1998, sold 15,847 copies, hence it’s safe to say more than 20,000 copies are in print. In 2010, Sawyer added a teacher’s guide to accompany the ninth printing. In the introduction to that guide, dedicated to Mary Thomas, he wrote the following:

“One of the great joys of writing is to hear from one’s readers.  I have been fortunate to have had phone conversations with classes reading Where the Rivers Meet in Manitoba, corresponded by e-mail with readers in Alberta, visited and read in classrooms throughout B.C., and received letters from students from Ontario to Vancouver Island.

“Perhaps no letter an author receives matches those that open with a line like this (received from a Native adult student in Merritt, BC):  ‘I would like to acknowledge how much I really enjoyed your novel Where the Rivers Meet. This novel was the only book I’ve ever read and actually finished.’  I have been privileged to hear variations on that statement many times. What a thrill.

“But often these letters go beyond letting me know the reader enjoyed the book, or even that it was the first one he or she had ever read. Often they reflect the whole person behind the letters, sharing fears and hopes.”

Here are five samples of readers’ comments on WTRM.

— Doing an essay on Barry’s suicide was OK. I’ve thought about doing it at times myself. I dream about it still. Now I’m looking for the answer of why I dream about suicide, but I’m not dwelling on it.

— The rape scene brought back memories in my past. I have learned from [the book] that I wasn’t the only one in that position. The scared feelings were there again. But help was there. We worked on this part in class and the whole class was involved.

— The first part of the book that I liked is in the chapter with Grebs and his racism against natives. It’s not that I like racism. It shows that racism still pops up here and there. I still have to look at this one every day and try to treat everyone equal.

— A lot [of the book] reminded me of when I was going to school, the racism. But the only thing different from me and Nancy is that she did something and I quit. But now I’m back to school and this time I’m going to do it.

— The part about Barry committing suicide was hard on me because our class did a lot of research on why people commit suicide and how to prevent people from doing it. The reason it was hard on me is because I tried but never succeeded like Barry did. Your book was great, so have a Merry Christmas and a Happy New Year.

Books from large publishing companies tend to get recognized with publicity, whereas Where the Rivers Meet is from a low-profile, First Nations-owned imprint. Few people have heard of Don Sawyer. But aboriginal students throughout Canada have found truth, inspiration, affirmation and their own voice in Don Sawyer’s story for almost thirty years. ABOVE: Thompson Fraser Confluence, Lytton: Known as The Forks during the 1858 gold rush, the town of Lytton, on the east side of the Fraser River, where it joins the Thompson River, has been inhabited by the Nlaka’pamux people for over 10,000 years. Its confluence is evoked as the setting for Don Sawyer’s young adult novel, Where the Rivers Meet (Pemmican, 1988), based on Sawyer’s experiences as a teacher in the Fraser Canyon and augmented by the cultural knowledge of the late Neskonlith elder Mary Thomas.