#622 The secrets of Okanagan Lake

Okanagan Lake: An Illustrated Exploration Above and Below the Waters
by Raphael Nowak

Okanagan Lake fills the bottom of the Okanagan Valley between Penticton and Spallumcheen. It is 135 kilometres long and varies in width from one to five kilometres and has a long geological and social history. Its shores have been a trail, and then a series of fish camps and settlements, since the Ice Age. It has featured in millions of photographs, and tens of thousands of brochures, fruit industry advertisements, tourist marketing strategies, and real estate promotions.

Raphael Nowak loves this lake enough to call it “the most important lake in British Columbia,” although he doesn’t say why. Such enthusiasm is charming.

Along with the heat of the Okanagan Valley, Okanagan Lake is one of the defining features of settler culture in south-central British Columbia. Currently, for example, the sprawling city of Kelowna lies at its shallow mid-point, countered by the Westbank First Nation billboards on the city’s southern approach. 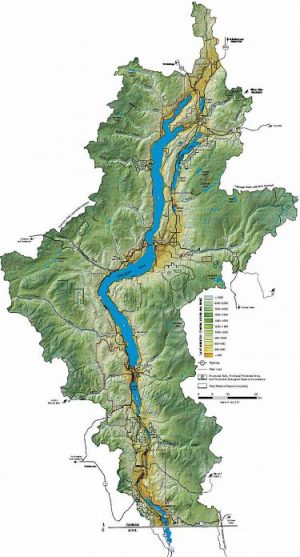 Despite all this fame, the lake’s depths, however, are little explored. Raphael Nowak has done something about that. This book is his report.

I suggest that when you read this book, you re-title it for yourself, with something like The Water of Okanagan Lake. That’s Nowak’s lake: less the “body” of water commonly called “Okanagan Lake” than the water within it. This is a book about the lake as a body of water, how it influences its environment, and how it is influenced by it. It is only marginally a book about geological and social history. Instead, what interests Nowak is water itself, and its physical properties.

Geologically, Okanagan Lake is an inland fjord, sitting in the bed of a dramatic slip fault. The energy of its push to the east can be seen in the ridge above Okanagan Lake Park, lifted up nearly 90 degrees, the uplifted sea beds of Vernon, and the cores of a chain of stratovolcanoes that vented the pressure from these collisions.

The towers of cinders above Turtle Mountain, Terrace Mountain, Black Mountain, Mount Boucherie, Giants Head Mountain, Munson Mountain, and their sisters, were carried away by glaciers, but their last flows remain, frozen in place along the lake’s shore. Where the Mission Creek Fault intersects at Squally Point, it has succeeded in bending the lake almost 90 degrees.

A glacial erratic in Okanagan Lake. Photo by Raphael Nowak

Near the end of the Fraser Glaciation, the basin of Okanagan Lake held an even deeper lake called Glacial Lake Penticton, dammed by ice at McIntyre Bluff to 155 metres above current lake levels. It stretched as far north as Enderby. This massive lake, which contained all the central and northern Okanagan Valley lakes, including Kalamalka, Wood, Ellison, Skaha and Vaseaux, drained out through the Similkameen, and south from there through Conconully, Buck Pass, and into the Methow and the Columbia.

Along the shores of the ice that filled sections of this lake, glacial rivers deposited their gravels in river beds now high above the valley bottom. The clay terraces of Naramata and Summerland are the remnants of the bottom of a lower lake that formed at Okanagan Falls, cut into cliffs when the water finally escaped. This geologically-energetic environment is the setting for Nowak’s exploration.

Okanagan Lake itself was originally filled with fossil glacial water. Its surface lies at 342 metres above sea level and has a reported maximum depth of 262 metres. The cut made by the gravitational pressures of two kilometres of ice and rock-splintering freeze-thaw cycles, however, stretches down through up to 750 metres of gravel and fine silt. As far as fjords go, it is three or four times deeper than Howe Sound and achieves something close to the Salish Sea’s maximum depth of 447 metres: not bad for a mountain lake.

An unidentified barge on the bottom of Okanagan Lake. Photo by Raphael Nowak

Much of the book consists of documentation and photographs of Nowak’s discoveries in the silt layer of the lake bottom. These include rare plant colonies, mysterious barges, flotsam and jetsam, and, perhaps most intriguingly, lost stream beds. If Nowak’s hunches are correct, they point to a historically lower level for Okanagan Lake, with implications for cultural, archaeological, and hydrological narratives of the lake over time.

These technologically assisted lake explorations are made with passion and a deep sense of discovery. Much of the book documents Nowak’s journey to understand the lake’s water cycles, the amount of water available for human use, human intervention in the lake’s outflow through the Okanagan River, the fish and plants of the lake, and the various forms of pollution that have turned what was a crystal-clear lake three generations ago into what is at times a weed-infested soup. 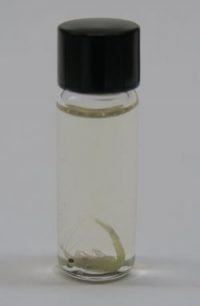 His honesty about that is refreshing. In truth, the water of the contemporary lake itself is quite murky. The summer beach in Vernon, for example, is rolling with waves of black crud from chopped-up Eurasian water milfoil. The water needs champions like Nowak.

Nowak documents the history of attempts to feed the lake’s Kokanee with introduced shrimp in the 1970s. He clearly lays out attempts ever since to control shrimp populations because in such a deep lake they never come into contact with Kokanee and effectively compete with them for food.

He documents ongoing attempts to control invasive Eurasian Water Milfoil in the lake. These include an experimental 1970s herbicide program and current mowing of weed growth and roto-tilling of the lake bottom in susceptible inshore areas.

A comparison with the state of Okanagan Lake and Okanogan County’s Conconully Reservoir in Washington State, where the herbicide program continues unabated, is unfortunately missing here. Although Nowak attempts to create a richly-packed cultural record of the lake and human life along it, he doesn’t cover the ecological costs of such interventions.

Overall, a little more care in cultural representations would be welcome. For example, in his well-founded concern for chemical pollution of the lake and resulting weed and algae growth, he cites his observation that the amount of land in agricultural production along the lake has dramatically increased in recent decades. It’s a burden that the farmers of the valley don’t need. It’s true that agriculture has negatively altered both valley and lake environments, but land in fruit production remains little-changed since the 1920s, and water, fertilizer, and pesticide use in the fruit industry are, in truth, much diminished since the 1980s. A little more precision here would have honoured this growing sense of stewardship.

Another easily-remediable cultural oversight is in Nowak’s representation of Syilx culture along and in the lake. For one, he represents little of the lake’s role as an ancient travel route between the Chilcotin and Columbia basalt plateaus. For another, despite his frustrations with farm run-off, he doesn’t document the effects of infilling the Kokanee and whitefish spawning shores between Penticton and Trout Creek, or the wetlands at Redwing Resort.

Instead, he spends considerable time with the far-more-enjoyable gold-rush-style pursuit of the colonial figure of Ogopogo, a purported crypto-zoological creature living in the lake, representing it as the Syilx ancestral figure of N’ha-a-itk, the spirit of the lake. This kind of reduction of mythological realities to a misunderstanding of physical environments is very 19th century, and sits poorly in a 21st century book. Whether there is a cryptosaur in the lake or not, N’ha-a-itk is a lot more.

So is Syilx culture. In his introduction, Nowak notes that “When the First Nations people first arrived, they understood the intrinsic value that Okanagan Lake had to offer in terms of providing food and clean water.” That’s not particularly culturally insightful.

One thing is for sure: Nowak has responded with unflagging and infectious energy to the spirit of this lake and has done much to lay out its physical life. All bodies of water in British Columbia deserve this kind of attention and Nowak’s ability to transfer his passion is little diminished by his omissions or passing errors.

It is, however, diminished by the unusual form of his book. Of the book’s 270 pages, the heart of his story doesn’t appear until page 155, with the story of his private research foundation, the Kelowna-based Institute for Underwater Research (IFUR).

Okanagan River dam at the outflow from Okanagan Lake, Pentiction

Preceding that is all of the context that sets the scene for its work. The book is arranged in the form of a blog, with mixed images and text centred around a variety of incidental topics only loosely leading to an argument. Simply starting at the beginning of the book can be confusing. For example, to introduce the lake, Chapter 2 meanders from Hydrology to Okanagan River History to McIntyre Dam Initiatives, 2017 Okanagan River Clean-up, Okanagan Lake Limnology, Nutrients and Water Quality, and so on, through stream and shore spawners, geology, aquatic life, valley creeks, the 2010 Stewart Centre Fire and Chemical Spill, foreshore, islands … and so on.

A reader could easily be distracted by this layout and think that Nowak’s collection of research is his real topic. It isn’t. He wants to take us on a first-ever journey under the waves.

And it’s a great trip! With many underwater photographs! I do recommend starting at page 155, though, and working backwards from there. From that perspective, it’s easy to see that any errors in the book, including his oversight of the depths of Syilx culture or even farming culture along the lake, are a result of presenting this material as if it were about the lake as a cultural space.

This is a book about water — and it is an inspiring statement of one young man’s commitment.

Harold Rhenisch was raised in the grasslands of the Similkameen Valley and has written some thirty books from the Southern Interior since 1974. He won the George Ryga Prize for The Wolves at Evelyn (Brindle & Glass, 2006), a memoir of German immigrant life from the Similkameen to the Bulkley valleys. His other grasslands books are the Cariboo meditation Tom Thompson’s Shack (New Star, 1999) and the Similkameen orchard memoir, Out of the Interior (Ronsdale, 1993). He lived for fifteen years in the South Cariboo and has worked closely with the photographer Chris Harris on his Cariboo-Chilcotin books published by Country Lights: Spirit in the Grass (2008), Motherstone (2010), and Cariboo Chilcotin Coast (2016), as well as The Bowron Lakes (2006), and he writes the blog Okanagan-Okanogan: One Country without Borders, from his home in Vernon. For seven years, he has toured the grasslands of Washington, Oregon, and Idaho while working on Commonage, a history of the Okanagan region set in its American context, highlighting the American history of Father Charles Pandosy and situating the roots of the Commonage land claim in the North Okanagan in American colonial practice in Old Oregon. Harold Rhenisch lives in Vernon.