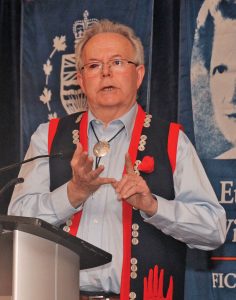 Neil Sterritt, winner of BC Book Prizes’ 2017 Roderick Haig-Brown for the best book to contribute to the understanding and appreciation of British Columbia for, Mapping My Way Home: A Gitxsan History (Creekstone 2016), died in Williams Lake on April 9, 2020.

Born and raised in Hazelton, Sterritt’s hereditary name was Madiigam Gyamk, from the Gitxsan House of Gitluudaahlxw. He earned a Mining Diploma from BCIT and worked for various mining companies; and later for the Gitxsan-Wet’suwet’en Tribal Council, Assembly of First Nations and with countless First Nations communities and organizations throughout B.C. and the Yukon.

During the precedent-setting aboriginal rights case, Delgamuukw v. The Queen in 1987 – 1990, he spent 34 days, the longest of any witness, on the stand as an expert witness defending the knowledge of Gitxsan Elders and leaders. 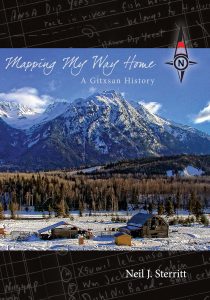 In Mapping My Way Home, Sterritt traces the history of the area at the junction of the Skeena and Bulkley Rivers, the resiliency of the First Nations residents who have maintained the villages of Gitanmaax and Hazelton, as well as his own personal story of growing up in Hazelton and helping his people fight the Delgamuukw court case. His overview stretches from the creation tales of Wiigyet to the advent of oil and gas pipeline proposals, including tales of the Madiigam Ts’uwii Aks (supernatural grizzly of the waters), the founding of Gitanmaax, Kispiox and Hagwilget and the coming of the fur traders, miners, packers, missionaries and telegraphers.