M is for John McKay 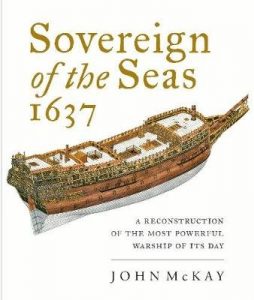 John McKay has written Sovereign of the Seas 1637: A Reconstruction of the Most Powerful Warship of its Day (Seaforth Publishing $68.95 hc), which includes a history of the ship and a folio of drafted plans and drawings of it’s design, from the hull to the sails and rigging. The book has already been nominated for best nautical research award. McKay, a professional draftsman and authority on the design of ships from the sailing era, first got into writing books while researching HMS Victory, a museum ship in England best known as Lord Nelson’s flagship at 1805’s Battle of Trafalgar. That resulted in, The 100-Gun Ship Victory (Conway Maritime 1987), which has had six reprints and established McKay as a maritime historian. He lives in Langley. 978-1-5267-6629-8