At the Wilderness Edge: The Rise of the Antidevelopment Movement on Canada’s West Coast
by J.I. (Jack) Little 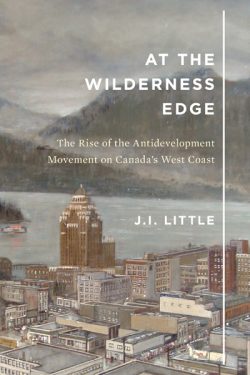 Bear with me, please. Shouldn’t “Wilderness” be in the possessive? At the Wilderness’s Edge maybe? If so, this is a shocking error on the part of the author, the publisher, and presumably a couple of peer reviewers and manuscript editors. Worse still (Belshaw continued, pedantically), there are references to the Vancouver Parks Board. Shame! It’s the Park Board. Harumph.

That’s right, I’m stooping to apostrophes and plurals … because there is little else to criticize in this book. It is a scrupulously researched and well-argued study, one that ought to attract a wide readership. It is good scholarly history presented in an engaging voice, and the lessons it offers are timely in the extreme.

Although this study covers five confrontations between developers and their various opponents from as early as the 1930s, it really is a book about the 1970s. The decade that gave us demos, discos, and DOA is finally getting its due. (And if you think that’s too much alliteration, blame Jack Little for setting a bad example. His upcoming book is entitled Farm, Forest, and Family.) Little, a retired Simon Fraser University history professor, is a prodigious writer and one of only a handful who earn the description “Canadian historian.” He has taken up regional issues in New Brunswick, Québec, Ontario, and British Columbia, has written biographies of men and women, and has done more to rescue ox-power from the memory-hole than perhaps anyone ought. He writes across centuries with ease and has a good eye for seemingly contradictory impulses in historical actors. At the Wilderness Edge gives him a fine opportunity to demonstrate why nuance matters. 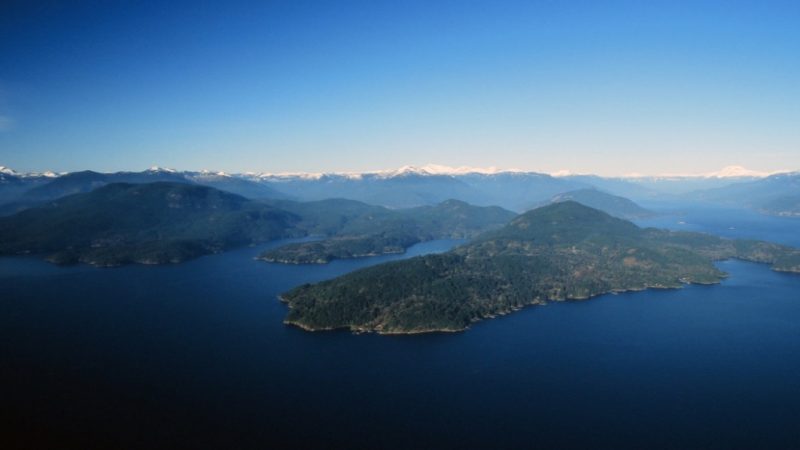 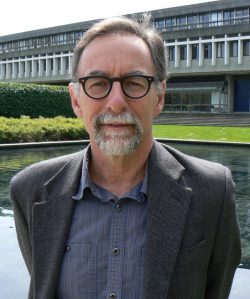 “Antidevelopment” is a terrifically slippery term. Given the overlap of these protests in the seventies, one might quite reasonably assume that hippies, counter-culture activists, and seasoned demonstrators would be front and centre in every campaign. However, whether the target is mining on Gambier Island, logging and a ski resort atop Hollyburn (Cypress) Ridge, suburbanizing Bowen Island, shiny towers at the gateway to Stanley Park, or a coalport at Squamish, the usual suspects are either conspicuous by their absence or found embracing strange allies. The Communists were at the barricades at Stanley Park alongside Yippies, the anarchist Vancouver Liberation Front and the very starchy-sounding West Point Grey Civic Association and no less a Social Credit worthy than Grace McCarthy (a cabinet minister at the time). Antidevelopment movements, it turns out, tend to attract a lot of upper-middle-class folks. What kept logging and subdivisions at bay on Bowen Island was “well-heeled” blue-chip Social Credit supporters with weekend and holiday properties on site; through their press organ The Bowenian, they sniffed at the prospect of working-class riff-raff and “undesirable transients” who might be attracted to construction jobs and suburban living (pp. 74-6). (Echoes of the anti-transit lobby in West Van, no?).

Even these influential nabobs of NIMBYism,[1] however, needed the support of the newly elected New Democratic Party in 1972-75 to halt clearcuts and subdivisions (p. 79). These alliances are thrown into further relief when we recall that Socred rhetoric in these days was larded with red-baiting: the pro-development Bowen Breeze warned its readers that the NDP was “going to take your property away from you … already the machinery is in operation….” (p. 82). Not surprisingly, the NDP had its own pro-development (cast as “pro-jobs”) elements, including Premier Dave Barrett who favoured a coalport at Squamish. It is these (con)fusions of right and left, rich and not-so-rich, “arcadian” traditions regarding “the balance between nature and culture” and a deep-seated suspicion of ruthless capitalist developers that make all the difference in these protests (p. 85). That is surely the big takeaway. 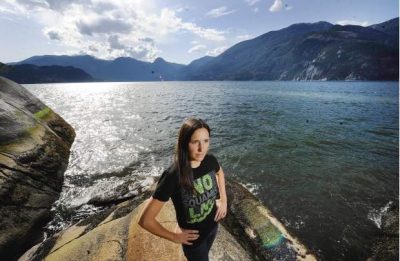 Tracey Saxby of My Sea to Sky opposed the Woodfibre LNG plant, near Squamish. 2015 photo by Mark Van Manen.

Looming over all of this are current development proposals in the region, the most pertinent of which is the LNG port at Woodfibre near Squamish. If the coalport was too dangerous — in terms of shipping and impact on scenery/tourism, how does the LNG port compare? Tourism by the 1970s was big enough a sector to give natural resource extraction a run for its money. “Quality of life” is now so mainstream that the tourism card does not have to be played with such force. We reached this point in our cultural discourse via the drive through Britannia Beach and the view over to Gambier Island — which could easily have become a cratered open pit mine. 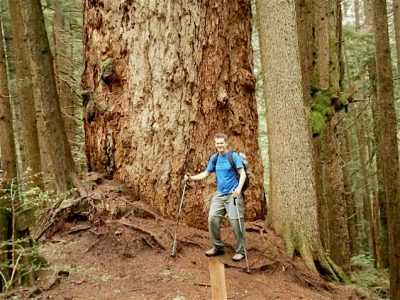 The story of Hollyburn Ridge stands apart from the rest of these studies because the battle for and against resort-ification takes place across forty years. As a longer study, it reveals changes in the ecology of protest. In 1943, for example, concerned organizations included “the Alpine Club of Canada, the Vancouver Natural History Society, Burnaby Field Naturalists’ Club, the University Outdoors Club and the BC Natural Resources Conservation League.” It even drafted in the president of the Conservation League, H.H. Stevens, an arch-conservative with a long record of racist proclamations under his belt (p. 56). By the 1970s some of these had been succeeded (as we see at Squamish) by the BC Wildlife Federation, the BC Steelhead Society, the Scientific Pollution and Environmental Control Society (SPEC), and the Capilano Rod and Gun Club. In many instances, these diverse though sometimes overlapping interest groups founded coalitions, typically with “Save the” in their name.

Were these environmental movements? Insofar as every political issue is ultimately “environmental,” that’s an easy yes. More to the point, these were confrontations between two perspectives on land and vista and the critics operated from “human-centred” assumptions about “environment” (p. 108). There are clear efforts on the part of commentators in the 1970s to characterize these battles in binary terms: “progress” against “nature.” Little will have nothing of this. The emotions and positions are much more complex. The creation of Devonian Harbour Park in 1984, Little writes, may have “detracted from more important environmental issues, but the fact remains that the protest movement did signal a widespread shift away from an unreflective faith in the benefits of large-scale urban property development and expansion” (p. 49) And this “shift” is, I think, worth dwelling on. 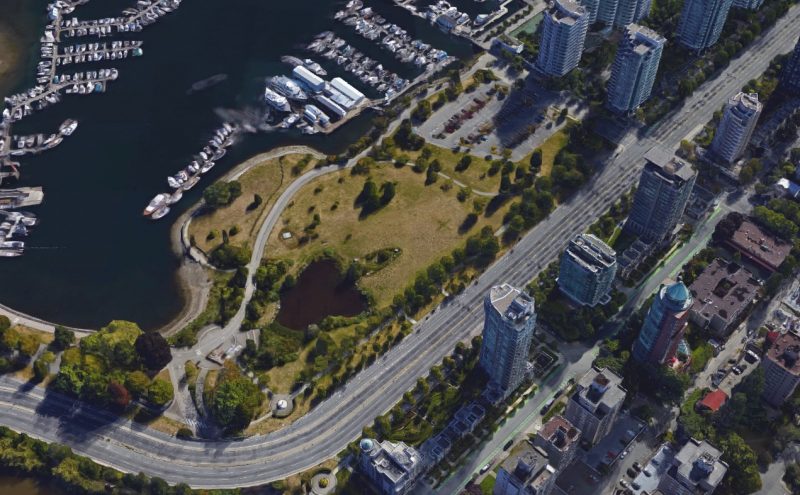 When opposition in Vancouver to expanded pipeline capacity and oil shipments is characterized (by Albertans, Ottawa, the oilpatch in general) as some kind of cheap and ill-informed green posturing, the pro-development interests and shills could not be more wrong. This is what “culture” looks like. Jack Little flags the sweet-spot in the mid-century protests when left wing and anti-corporate politics meets conservative, upper-middle class communities on common ground as regards water, views, public space, and the need to dial down the agitated state of modern capitalism. That Venn diagram of protest is a sign of a shared set of values — of culture. For opponents of tanker traffic and LNG ports in 2019, this quote from the Sun newspaper in 1972 might send a shiver of recognition up the spine. “The real question … is whether Howe Sound should be sacrificed to dirty industry and massive coal freighter traffic. It’s not whether we want a cancer here, where it shows, or here, where hardly anyone will notice, but whether we want a cancer at all” (p. 105). Vancouverites of any ilk will not go gentle into that next bad idea. 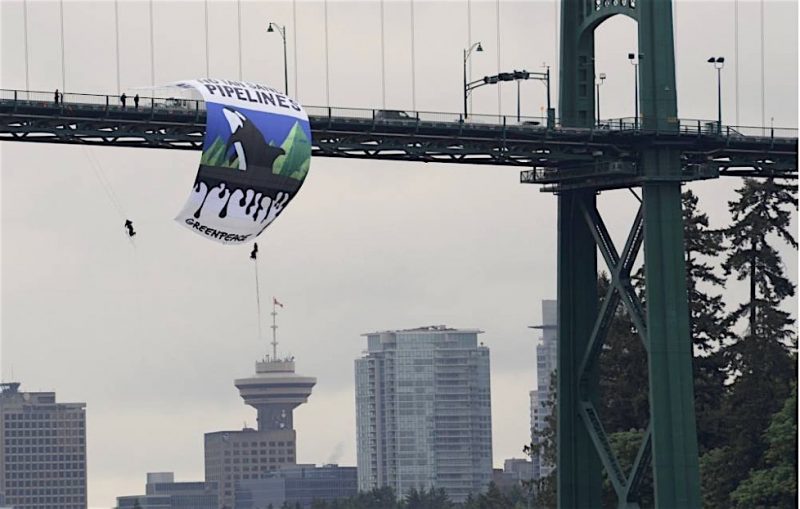 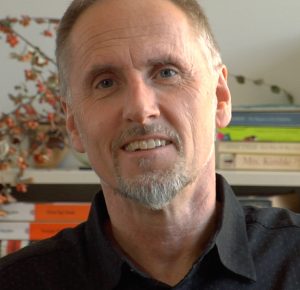 [1] Pedant alert. I don’t wish to be anachronistic: as Little points out, “NIMBY” isn’t coined until a bit later, in the 1980s.