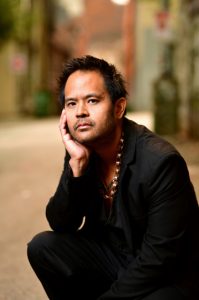 Born in 1974 and raised in Vancouver, C.E. Gatchalian is a Filipino-Canadian who has written nine plays. His first non-fiction book is a memoir, Double Melancholy: Art, Beauty, and The Making of a Brown Queer Man, promoted as as a “poetic love letter to the art that inspired Gatchalian while simultaneously exposing its oppressive, heteronormative and white legacies that invisibilized him as a queer person of colour.” Gatchalian is a two-time finalist for the Lambda Literary Award who studied Creative Writing and Theatre at the University of British Columbia (BFA, 1996; MFA, 2002). He was non-invisiblized at The Pumpjack Pub, 1167 Davie Street, Vancouver, on May 30th, 2019, for a book launch on the unceded territories of the Musqueam, Squamish and Tsleil-Waututh Nations. The event was hosted by theatre artist and cultural leader Valerie Sing Turner, featuring performances by Kimmortal, Davey Samuel Calderon, Jade Santos, and Carmela Sison (Mela Mia).

Gatchalian’s first play, Motifs & Repetitions, aired on Canada’s Bravo! channel in 1997 and on the Knowledge Network series Independent Eye in 1998. His next play, Claire, was produced in Vancouver in 1998. His features and arts criticism have appeared in numerous publications, including Xtra! West, Vancouver Sun, and Georgia Straight. His website describes his play Falling in Time thus: “Set in Vancouver in 1994, the year of the death of North Korean leader Kim Il-Sung, the play criss-crosses two hemispheres and spans more than forty years. Through all this, four distinctly different lives intertwine. Steve is an aging, outrageous, bisexual Korean War vet who embodies the sadistic tendencies of Western imperialism that polite society has too often tried to sweep from view. Jamie is an aloof, repressed ESL teacher haunted by a troubled childhood. Chang Hyun is a young Korean student brimming with anti-Western sentiment and still reeling from a traumatic experience in the military. In the middle of it all is Eun Ha, a woman who lives through the Korean War and, against all odds, finds the will to survive. A brutally honest depiction of war, rape, racism and animal sexuality.”