105 Hikes in and around Southwestern British Columbia
by Stephen Hui, foreword by Cease Wyss (T’uy’t’tanat) 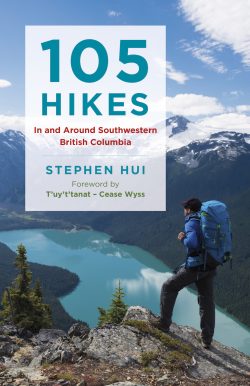 The relative growth of recreational hiking in southwest B.C. has far outpaced the region’s population growth. Fifty years ago, the number of people on any weekend in the adjacent mountains might have been a dozen or so, and there were few guidebooks. Many people looked upon hiking and mountaineering as oddball activities: as a rather brutal high school teacher of mine put it, “real men don’t hike or climb mountains.”

Many of these trails were described, marked, and maintained by the Mountain Access Committee (later the Federation of Mountain Clubs of British Columbia), an informal organization consisting of delegates from six lower mainland outdoors organizations, including the Alpine Club of Canada, the North Shore Hikers and, most importantly, the B.C. Mountaineering Club (BCMC). From about 1966 to 1972, the Federation of Mountain Clubs published a Mountain Trail Guide for the South West Mainland area of British Columbia. 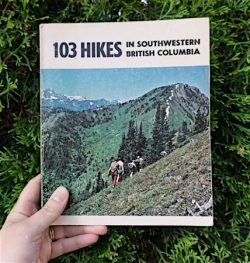 In 1966, the Mountaineers (Seattle) published the first edition of 100 Hikes in Western Washington. Inspired by this, the following year a BCMC committee began to compile a similar guide to southwestern B.C., under the general guidance of John Harris, a past president of the club. The book, 103 Hikes in Southwestern British Columbia, appeared in 1973 (Mitchell Press). It was largely prepared by David and Mary Macaree following the model of 100 Hikes and published jointly by The Mountaineers and the BCMC, with the Seattle organization fronting the money.

An immediate success, 103 Hikes was reprinted several times before a revised second edition appeared in 1980, published by Douglas & McIntyre and The Mountaineers (United States), with the authors listed as “Mary and David Macaree on behalf of the British Columbia Mountaineering Club.”

By the time the fourth edition appeared in 1994, hiking and mountaineering had become popular, something that “real” men and women could do without feeling like eccentrics. Today there are many hundreds or even thousands of people out hiking in southwest B.C. every weekend. David Macaree died in 1998, Mary in 2008, and the fifth (2001) and sixth (2008) editions were largely prepared by Jack Bryceland, a long-time BCMC member. Competing guidebooks appeared, but 103 Hikes remained the bible. Over its 45-year life, the book sold over 100,000 copies, according to the publisher. 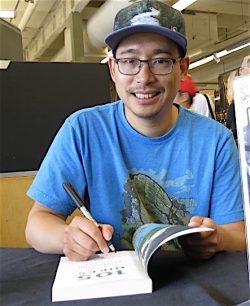 The current book, 105 Hikes in and Around Southwestern British Columbia, is advertised by the publisher as the successor to 103 Hikes. It is the first without any direct connection to the BCMC, although a portion of the revenue from sales will go the the BCMC. The author, Stephen Hui, was a writer and photographer with the Georgia Straight for eight years and is currently the communication lead for B.C. at the Pembina Institute. He is younger than the Macarees when they started their 103 Hikes project, and than Jack Bryceland when he took it on, and this helps give the book a “younger” feel. The title change, from “103” to “105” also breaks with the 103 Hikes tradition.

The book is closely modelled on 103 Hikes, though. The hikes are each longer than three hours and shorter than twelve. Each hike is allotted two pages, beginning with summary material on distance, time, elevation gain, difficulty, and a subjective quality rating. The necessary but often-boring details on road access are placed at the end of the main hike description. 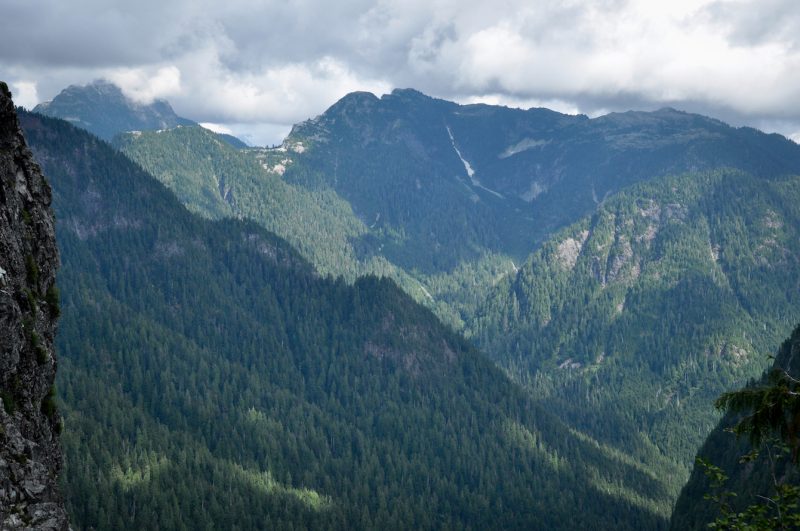 It is good to see public transit options described; many outdoors-oriented people don’t have cars. Maps, one for each hike, were always a weak point in the old books, although they had improved by Bryceland’s tenure. The new maps are much better: real maps, in colour, with contours, and icons showing points of interest, trail junctions, peaks, and so forth.

Each hike is accompanied by one photo, all but one taken by the author. These are a mixed bag as far as usefulness and quality go. Some are excellent; a few others, such as the one of Illal Mountain, are so poorly reproduced as to be useless. Some, such as the photo of the purple starfish, seem to me to add little to the book. The photo of Needle Peak has its summit annoyingly cut off, perhaps because of the designer’s need to keep within the two-page format for each hike. 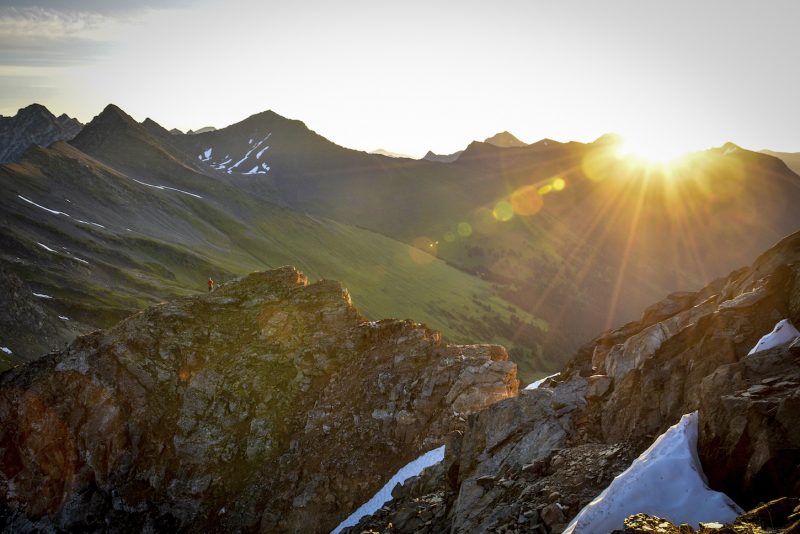 Sunrise over the Cayoosh Range from above Upper Twin Lake, 2016. Photo by Stephen Hui

In a book such as this, the choice of hikes to include is always a personal one. The area covered has been expanded to include southern Vancouver Island, hills near Bellingham, and the Gulf and San Juan Islands. A necessary consequence is that there are fewer hikes in the Lower Mainland than in the old books. 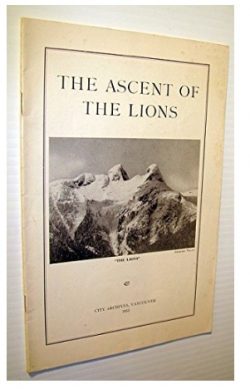 The selection of hikes seems good, although it is weak in the Chilliwack valley area, while the Howe Sound-Whistler area is over-represented. Unlike some hiking books, the author has personally done all the trips included. The description for each hike covers the trail, trail conditions, points of interest, safety notes, and, in some cases, comments on flora and fauna.

An unusual and welcome feature is the inclusion of Indigenous place names where appropriate and known. Unwelcome to me is the seemingly arbitrary renaming of The Lions to the Sisters or Twin Sisters. It could be argued that the Twin Sisters is a more appropriate name than the Lions, but The Lions has over a century of well-entrenched usage. People familiar with the 1953 pamphlet by John, Robert, and William Latta, The Ascent of the Lions, published by the Vancouver City Archives may find, as I do, The Lions to be a perfectly adequate name with no compelling reason to change it.

The text is rounded out by a foreword and welcome by Cease Wyss (T’uy’t’tanat), a Coast Salish ethnobotanist; a tribute to Mary and David Macaree by publisher Rob Sanders; and sections on safety and ethical hiking by Michael Coye and Jaime Adams. An extensive table summarizes the hikes by quality, difficulty, suitability for kids, and other factors. 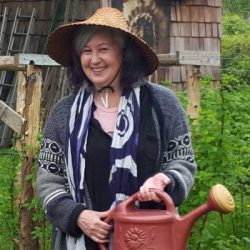 Any guidebook is only as good as the information it contains. I have done just two of these hikes since the book came out. One of them, Brandywine Mountain, has a major blunder in the driving directions (go left on the Brandywine Creek road, not right as instructed). On the other, Illal Mountain, the driving directions are a bit sketchy and can lead to confusion, something that a few more words could have prevented. Time will tell if there are other such mistakes; if there are, they could be posted on a web site and fixed in the next edition.

But on the whole, this book is a fine successor to 103 Hikes, and I hope it goes through as many editions as the Macaree-Bryceland books. 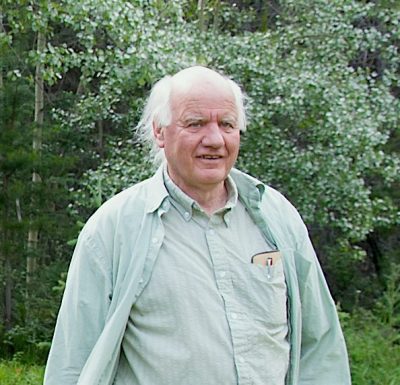 Glenn Woodsworth has been exploring the western B.C. wilderness for over fifty years. He has climbed and hiked extensively in the Coast Mountains, where he has many first ascents to his credit. He is a past president and honorary member of the B.C. Mountaineering Club and for some years was a member of the Geographical Names Board of Canada. A geologist by profession, Glenn is an emeritus research scientist with the Geological Survey of Canada, where he worked mainly on deciphering the geological history of western British Columbia. He has written, edited, and contributed to several outdoor guides, most recently Hot Springs of Western Canada (3rd edition, 2014), written with his son, David Woodsworth. With his wife, Joy, he operates Tricouni Press, which has published books on a variety of B.C.-related subjects.