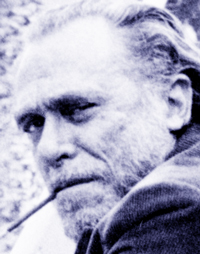 When Charles ‘Hank’ Bukowski made his first trip to Canada in October of 1976, organizers for his Western Front reading were surprised that women in the audience far outnumbered men. That reading is described by Bukowski towards the end of his novel entitled Women. The slovenly Bukowski “was genuinely physically ugly,” according to reading organizer Ted Laturnus, but he had “a soothing monotone voice and a full head of hair that reminded me of Fabian.” At a post-reading party, according to Laturnus, Bukowski didn’t drink much and “was besieged with offers of congress.” No matter where Bukowski went during his Vancouver visit, he “had to fight the women off,” according to Jim Christy’s The BUK Book: Musings on Charles Bukowski (ECW Press 1997).

Charles Bukowski returned to give another Vancouver reading in 1979, arranged by Dennis B. Del Torre. After a night of dancing upon his arrival, he fell out of bed in the Sylvia Hotel and had to be taken to the hospital for stitches. The reading the following day at the Viking Inn was a raucous affair at which Bukowski was drunk and the audience heckled. Entry fee was $6 and he read 17 poems. There were approximately 650 people in the audience. It was the last Charles Bukowski poetry reading that was recorded on film or video, as well as the last performance Bukowski gave outside of the United States. Footage from that reading appears at the outset of Bukowski: Born Into This, a 2003 documentary about Bukowski by John Dullaghan that was screened at Vancouver’s Ridge Theare in March of 2005. During the making of that documentary, the filmmakers uncovered a videotaped record of the entire Bukowski performance that was made by Dennis B. Del Torre. The footage was thought to be lost until it was discovered almost 25 years later at Bukowski’s widow’s house. This recording of a full-length performance by Bukowski has since been released as There’s Gonna Be a God Damn Riot in Here.

“The man I ran into was someone quite different from either the one that (Ted) Laturnus booked at the Western Front (which reading I did attend) or the man that (Jim) Christie talks about,” says Dennis B. Del Torre. “I think that by 1979 he was very confident and settled down with Linda Lee in San Pedro. My wife at the time and I were quite privileged to stay at their house six months later for the final reading he gave in March of 1980. We had a week of late night debauchery contrasting with a home-bound couple. By debauchery I mean Hank and I( would sit up and drink and talk til 2 am while Donna and Linda Lee would go to bed much earlier.

“I went to Santa Anita with Hank. He left me to attend to his choices and betting. Someone came down from City Lights with lots of cocaine and then the last reading in Redondo Beach took place on March 31st? or was it March 30th? Anyway, I held the second-to-last Bukowksi reading and the last one outside the U.S. I attended that Last Reading in Redondo Beach.

“It was quite a ride. I still love Bukowski and most of his work. He was always fair to me. He embodied immense contradictions in the American fabric and expressed them better than most.” From Jim Christy’s appreciative, concise text in The BUK Book we learn that one of Charles Bukowksi’s closest friends in his final days was Sean Penn. His film called The Crossing Guard, starring Jack Nicholson, concludes with a dedication to “my friend, Charles Bukowski. I miss you, S.P.” The BUK Book also features 24 intimate and raw b&w photos by Claude Powell, one of Bukowski’s confidantes and drinking buddies. In more than 40 volumes of verse, and several works of fiction, Bukowski explored the world of prostitutes, bums and losers with graphic depictions of sex, violence and exploitation — becoming one of the best known ‘underground’ writers in English.

In the future Charles ‘BUK’ Bukowski could be most widely remembered for Barfly, the 1987 semi-biographical Hollywood film about a writer’s boozy adventures starring Faye Dunaway and Mickey Rourke. Produced by Francis Ford Coppola and written by Bukowski, this comedy-drama was directed by Barbet Schroeder. Rourke portrayed Henry Chinaski who has difficulty coping with success and notoriety when he is “discovered” by a major publisher. Bukowski was distressed by Rourke’s unrehearsed and exaggerated depictions of him.

A restaurant on Vancouver’s Commercial Drive named Bukowski’s became a popular forum for readings and literary gatherings, including Peter Trower’s 70th birthday party, during the 1990s and the following decade. The son of a Polish-American GI and a German mother, Charles Bukowski was born on August 16, 1920 in Andernach, Germany. He grew up in Los Angeles, California where his father, a violent and abusive tyrant, drove a milk wagon and repeatedly whipped his son. At age 14, Bukowski’s upper body and face was ravaged by pus-filled boils. Ashamed and lonely, he graduated from high school in 1939, got arrested for draft evasion, travelled by bus throughout the United States in the early 1940s, taking odd jobs, lived on Skid Row, drank, wrote constantly, sent hundreds of short stories to magazines (nearly all of which were rejected) and lost his virginity at age 24. He proved himself to be a failure as a mail carrier after a stint of almost three years, but Bukowski later returned to the U.S. Post Office to work as a tormented mail sorter for seven years. He had a ten-year relationship with Jane Cooney Baker (the Faye Dunaway character in the bio-pic), then married an editor named Barbara Frye in Las Vegas. They had one daughter. Divorce followed. Then the death of his parents. Then literary notoriety. More women, more fame. His final marriage endured. He died on March 9, 1994.

Although it’s small, The BUK Book ranks with David Staines’ biography of Ethel Wilson, Ben Metcalfe’s biography of Roderick Haig-Brown and Keath Fraser’s appreciative portrait of Sinclair Ross as one of the better books about a writer ever written in British Columbia. Christy’s mini-biography claims Bukowski was a better, more important writer than Hemingway. More than a few people would agree, such U2 singer Bono who once admiringly noted, “He had no time for metaphors.”

The building that housed the Viking Inn at 828 East Hastings has had long and vibrant history. In 2015 it was home to the Hastings Dance Studio, painted with a bright orange exterior. It opened in 1928 as the Silver Slipper. The venue was used for dances and weddings and concerts. In the wake of World War II, it briefly served as the headquarters of the Vancouver Buddist Temple. Renamed the Hastings Auditorium in the 1960s, it evolved into a major venue for punk rock with concerts by countless bands that included D.O.A., the Pointed Sticks and Young Canadians (formerly The K-Tels). In this era it was known as Viking Hall. It also served as a location for Dennis Hopper’s 1980 movie Out of the Blue in which there is a sequence of the Pointed Sticks playing two of their songs.