Brett Josef Grubisic’s new novel, From Up River and For One Night Only, was partially inspired by the author’s hometown of Mission. 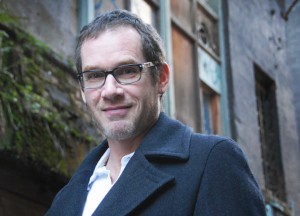 As in Grubisic’s first novel, The Age of Cities, Mission is called River Bend City.

Brett Josef Grubisic settles in to discuss his new book at a pizza place on the University of British Columbia campus. He sits on a leather sofa in front of a gas fire, flanked by a row of floor-to-ceiling windows. It’s an idyllic spot, even if writing his latest novel was anything but.

Grubisic, a popular instructor of English literature at the university, first started thinking about Mission because of his work. “I regularly teach Alice Munro’s Lives of Girls and Women,” he explains. “The book ends with a kind of manifesto about how one should represent one’s hometown, and she uses a lot of words like accuracy and so forth. And the character who’s the writer in [Lives] rejects an early version of her novel which is filled with exaggeration and caricature. And I just thought the idea of how one represents one’s past through fiction was something I wanted to explore.”

“I have ambivalence about” Mission, Grubisic continues, “but I realize that I routinely return to it to gripe about it, and I thought that would be an interesting space to explore. I started to explore that in The Age of Cities but it was set in the early 1960s, before my own time there.”

2006’s The Age of Cities, published by Arsenal Pulp Press, tells the story of a closeted gay teacher who lives with his mother, visiting Vancouver for brief forays into the big city. From Up River, the unlikely tale of four teens with a dream to make it big as musicians – who don’t – takes up life in River Bend City two decades later, with an entirely different cast of characters.

In From Up River and For One Night Only (Now or Never Press, $21.95) main character Gordyn, his name self-respelled, serendipitously wanders into the Granville Street record wonderland Phantasmorgia. ‘45 records from early punk bands like Siouxsie and the Banshees provide inspiration, along with the black-lipped and spike-haired employees themselves. The territory is familiar to Grubisic from his own teens. “Our typical trips were going to Eaton’s and window shopping. In the novel, Gordyn discovers Phantasmorgia, and that’s what we did. It was a whole world we never knew existed. The people in it are far more adventurous then you’d ever dream of being, but you recognize something in them.” Grubisic thinks. “A desire to be out of the ordinary.”

The novel’s four main characters — siblings Dee and Gordyn, and their two friends, also siblings, Jay and Em – must solve numerous problems to form the band of their imagination. Songs, lyrics, musical ability, access to instruments, places to play and a name – they’re all obstacles to be surmounted by the intrepid if not exactly talented teens.

“In terms of how much is fiction and how much is autobiographical, there’s a lot of autobiography and a lot of fiction. For example, I never played in any band, New Wave or otherwise,” says Grubisic, whose 80s-era snap of three teens, including a boy, sporting eyeliner, big hair, and shoulder pads graces the book’s cover. “The experiences get shifted from person to person. And yes, there were two sets of brothers and sisters in my real life, but these characters are several steps removed. There was no drug running, no prostitution,” he says, alluding to some of the novel’s more lurid – and unexpectedly hilarious — episodes. “The reality was extremely humdrum.”

Grubisic’s sister, Meesha Grubisic, died unexpectedly in 2014. In the novel, Jay’s sister Em also dies as an adult, leading to Jay and Dee reconnecting. How did life and the novel intersect? “That’s complicated,” Grubisic allows. “My novel was close to being finished when my sister was hit by a car. The writing after that changed the novel into something more serious. At the time of my sister’s death, I was drawn to the idea of finding a source to blame [for the tragedy]. The more I thought about Mission and my father, the more I thought that if they hadn’t existed, she wouldn’t have died. So the rewriting started dealing with that more. The novel became darker, the portrayal of Em’s father became less generous.”

“Originally the novel would have ended in 1981,” Grubisic continues, “and we wouldn’t have known – these characters could have been anything. These memories are all that Dee and Jay have left. They serve a different function than nostalgia,” says Grubisic, who had a similar experience cleaning out his sister’s house with her friends after her death. “Dee is telling these stories as a way to bring people together to form a community that’s marked by absence.”

For his previous novel, This Location of Unknown Possibilities, Grubisic switched gears to present-day Vancouver and the Okanagan, where his professor protagonist travels as a historical consultant to a period film. The professor, a modern Victorian complete with buttoned-up sexuality, thinks she’s getting an important role on the set as well as an interesting story to tell about how she spent her summer. Alas, the projected film is almost immediately discarded, morphing instead into a steam-punk mashup of the Victorian era, complete with the discovery of a crashed alien spacecraft in the desert and evil aliens for the movie’s busty lady explorer and her wimpy doctor sidekick to battle. Highlighting the general absurdity of the movie-making process, Grubisic peoples his novel with lonely people temporarily placed in far-off locales and locals hungry for a slice of the action, the bemused professor a mostly useless bridge between the two. Although his novels are all different, they share a satirical streak. Why? “I can’t do sustained sadness,” Grubisic explains. “I just don’t have that quality in my own experience of life.”

To a suggestion that he’s somewhat dour, Grubisic replies equably. “I’m as pessimistic as any writer, but I also have a large amount of optimism. And I think that optimism comes out in comedy.”

Grubisic is planning a third novel set in River Bend City, which will complete a trilogy about the place. He’s already assigned his novels in his own classes. What’s that like? “Once students get over the sense that they shouldn’t say anything that’s not positive, and that I’m not looking for praise. What they come up with that’s different from what I think is actually when it becomes really interesting. I get to teach [my work] from a position of authority – ‘this is what this symbol means.’ You don’t get that kind of authority when you’re teaching someone else’s work.”

In light of the novel’s focus on the music of the early 1980s, Grubisic is asked to name his favourite current bands. “Knife and Saint Vincent, Ladytron. Basically synth pop still, but more edgy,” he says. “My taste in electronic has remained constant.” He pauses. “Discovering something you didn’t know existed –“ like that music – “it changes you.” 978-1-988098-07-4

Carellin Brooks is a Freudian scholar, a Wreck Beach historian and a Vancouver Public Library trustee.