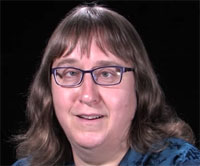 B.C. is less religious than other provinces. Or, if you prefer, it is more irreligious.

Having received the Floyd S. Chalmers Award for the best book published in Ontario History in 1996 for Revivals and Roller Rinks, UVic history prof Lynne Marks (right) has examined the limitations of organized Christianity in often godless B.C. for Infidels and the Damn Churches (UBC Press $95), a study of secularism in which she asserts class and racial tensions fueled irreligion in settler B.C. “I tend to say I am studying irreligion, rather than secularism,” says Marks, “because many of the people–mostly men–I refer to in the book can be defined as irreligious, but most are not entirely secular.”

The wide-ranging content includes a spiritualist picnic in Victoria, women in missionary societies, churches, a Chinese temple, a well-known atheist journalist in the Kootenays named Lowery and a prospector interviewed by Imbert Orchard in the 1960s named Jimmy White so said about going to church, “I quit altogether. I never went inside none of the damn churches after I get away from the East.” The remark captures one of the themes of the book. The further west people came, the more they felt disinclined to honour the institutionalized values of eastern North America and Europe.

Having taught in the history department of UVic since 1992, Marks has also received the Switzer-Cooperstock Prize for Western Canadian Jewish History (2010), the Marion Dewar prize from the National Capital Committee on the Scholarship, Preservation and Dissemination of Women’s History (2012) and the Provost’s Award for Activism and Advocacy, University of Victoria (2015). She received her B.A. from the University of Toronto in 1982, and her M.A. and Ph.D from York University in Toronto in 1992.