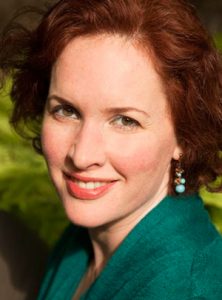 Gardiner is herself a former skater whose sister, Elin Schran, is a professional figure skater and co-founder of Boston-based Frozen Frog Productions, as well as the innovator of IceFlow, a yoga-inspired skating class.

To mark the second printing of Serpentine Loop, the sisters are combining with professional skater and choreographer Douglas Webster for a free public event at the Hillcrest Community Centre rink in Vancouver on March 24, 2017.

Previous iterations of the event have been held in New Hampshire and Massachusetts but this is the first Canadian event. Gardiner’s second book of poems, Tunica Intima (forthcoming, 2018) has been shortlisted in advance for the Kroetsch Award for Innovative Poetry.

Elee Kraljii Gardiner has also co-edited an anthology, V6A: Writing from Vancouver’s Downtown Eastside, with John Mikhail Asfour. The anthology evolved from the Thursdays Writing Collective, a non-profit organization of more than 150 writers at Carnegie Community Centre, which she founded. The anthology was shortlisted for the City of Vancouver Book Award in 2008. Gardiner has also edited and published other anthologies. She is originally from Boston and is a dual US/Canadian citizen.