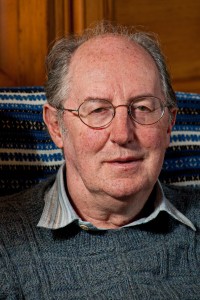 The Griffin in the Griffin’s Wood (Ekstasis $29.95), a spy novel in the tradition of John Le Carre’s The Russia House, is a marked departure for Victoria-based poet Stephen Scobie. Known for his  long narrative poems (McAlmon’s Chinese Opera; RLS: At the World’s End), and for his extensive critical work on Canadian literature, as well as on figures such as Georges Braque and Bob Dylan, Scobie’s latest literary output is set against the backdrop of a critical moment in modern European history (the fall of the Berlin Wall), and at the same time a playful game with the genre conventions of the spy novel itself. He earned a PhD from the UBC after which he taught at the University of Alberta and at the University of Victoria. Scobie is a founding editor of Longspoon Press, an elected member of the Royal Society of Canada, and the recipient of the 1980 Governor General’s Award for McAlmon’s Chinese Opera (1980) and the 1986 Prix Gabrielle Roy for Canadian Criticism. 978-1-77171-105-0