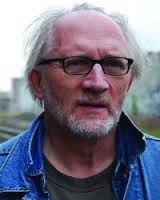 Once in a rare while a jacket blurb competes for resonance with the book it endorses. Sharon Thesen describes Patrick Friesen’s creation of a soul-searching, eccentric, wild woman and trickster for his 16th book, a short history of crazy bone: long poem (Mother Tongue 2015), as “at once a performance of the archetypal feminine forever at odds with patriarchal order and a libretto for the wayward, solitary, and vulnerable spirit of art, passion and expression.”

Patrick Friesen moved to Vancouver in 1996 and has since taught Creative Writing at Kwantlen University College. Well-connected in the Canadian poetry universe, Friesen now lives in Victoria and will appear in Ottawa (March 26), Victoria (April 23, Russell Books), Toronto (April 28), Hamilton (May 3), Toronto (May 4), Vancouver (May 13, Cottage Bistro) and Winnipeg (May 31) to promote the book.

Born in Steinbach, Manitoba on July 5, 1946, Friesen has Mennonite roots in Northern Europe. He graduated from University of Manitoba in 1969 with B.A. (Hons.) in English Literature. He has had various jobs, including driving cab, working on a highway crew, working in a window-making factory, and teaching various levels of school. Aside from his books of poetry, he has written songs with Cate Friesen (unrelated), Big Dave McLean and Jim Donahue, written text for modern dance, written documentary film scripts and radio plays and he has worked with improv pianist Marilyn Lerner with whom he released a CD entitled Small Rooms. He has also worked on translations of Danish Poets, including the selected poems of Ulrikka S. Gernes, entitled A Sudden Sky (2001), co-translated with Per Brask. His book Blasphemer’s Wheel received the McNally Robinson Book of the Year Award in Manitoba.