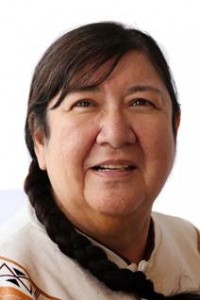 New Star Press author Marie Annharte Baker has been named the inaugural winner of the Blue Metropolis First People’s Literary Prize in 2015, mainly for her 2012 poetry collection, Indigena Awry. She will receive the $5000 prize in Montreal where she will be interviewed by Taiaiake Alfred as part of the Blue Metropolis International Literary Festival (April 20 — 26).

Born in 1942, Marie Annharte Baker is Anishinabe from the Little Saskatchewan First Nations. She was raised as a neglected child in Winnipeg, a city she abhors for its racism. Her alcoholic mother disappeared when she was nine. After studying at universities in Brandon, Vancouver and Minneapolis (centre for the American Indian Movement), she split from an abusive husband and turned to social work and activism.

In one of 17 ‘five feminist minutes’ commissioned by the National Film Board to mark the 15th anniversary of its Studio D, Baker examined racial and sexual abuse of Aboriginal women. After her first collection of poetry, Being on the Moon (1990), reflected the voices and concerns of urban Aboriginal women, she was invited onto CBC’s Morningside and appeared at the 8th Festival of the Written in Arts at Sechelt.

Baker is one of the Aboriginal writers who protested the successful Aboriginal stories of Alberta-born W.P. Kinsella in the late 1980s. “It’s like animals, you know,” she told the Globe & Mail, “pissing on each other’s territory. He pissed on ours, so I’m pissing on his… Nobody’s trying to tell anyone what they can write about. The issue is really about how cultural appropriation is used to obscure racism in the literary and publishing world.”

Co-founder of the Regina Aboriginal Writers Group, Marie Annharte Baker lived on the West Coast before returning to Winnipeg. Her other books include Coyote Columbus Café (1994), Blueberry Canoe (2001) and Exercises in Lip Pointing (2003).