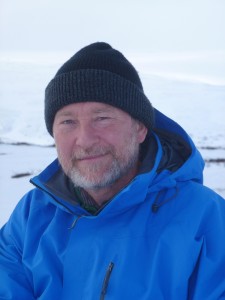 Harold Rhenisch (at right, at Go∂afoss, Iceland) successfully applied for a writer-in-residency in Iceland when he outlined familial connections to Gunnar Gunnarsson’s books in his application. Harold Rhenisch’s father was a German immigrant raised in Germany on stories and films of farm people in much the same vein as Gunnar Gunnarsson’s stories, “if not directly influenced by him.” Harold Rhenisch’s writer-in-residency in Skriðuklaustur and his journeys around Iceland with his wife, picking bilberries for lunch, resulted in his book, The Art of Haying: A Journey to Iceland (Ekstasis 2015). “I have no Icelandic ancestry,” says Rhenisch, “but you could say I grew up in Gunnar Gunnarsson’s books. His books sold millions of copies in Germany in the ’30s and ’40s, and he missed the Nobel Prize by a hair. The Black Cliffs was universally praised in 1932 and it was the first Icelandic crime novel.” Harold Rhenisch and his wife Diane made three trips to Iceland, initially because she had always wanted to go there. A day after their arrival in July, 2010, she sat on her bed and announced she never wanted to leave. He felt much the same way. Iceland transformed him–took the intellectual outside and beyond his bookishness–to produce a very different kind of book with more than 200 photos. “This is a love story,” he says, “for a country, for a woman, and for a way of life in which the old is new and the new is old and a man frees himself from the walls that books have made in his mind — walls that he previously didn’t know were there. It’s a scary thing, to have been kept by books my whole life, and then, one day, to step outside their pastures, but that’s what happened.”

The Art of Haying, according to Rhenisch, is about drawing a line through grass and making a new beginning from it. “I learned that one of the ancient arts, older than poetry but as old as the art of knitting, is the art of haying,” he wrote on his blog. “…Horses have human souls here. If you’ve never met an Icelandic horse, that might seem merely a poetic device.”

After visits in summer, winter and spring, Rhenisch wrote his travel memoir in which he chats with ravens, learns about knitting traditions and describes his month at Skriðuklaustur, writing about the modern Icelandic sagas of Gunnar Gunnarsson. Harold Rhenisch takes his hat off to Gunnar Gunnarson.

“The Nazi connection with Gunnar’s House was difficult for me,” Rhenisch says, “so, at first, I was thinking there’s no way I would stay there. But then I realized, who better, especially as he was no Nazi. It turned out to be a profound homecoming of sorts. The creative culture in Iceland is extraordinary. Plus, there are horses and rowan forests and extraordinary light. What’s not to love!”

Born in Penticton on January 5, 1958, Harold Rhenisch was raised in the Similkameen Valley where his family farmed and managed orchards. He subsequently worked as a nurseryman, tree grafter and pruner before he studied drama and writing in Victoria, acquiring writing degrees from UVic and UBC. He later lived in the Cariboo for fifteen years, producing ‘bioregional’ essays and numerous books of poetry.

In 2005, Rhenisch won the ARC Magazine Critics Desk Award and the Malahat Review Long Poem Prize–and received the Malahat Long Poem Prize again in 2007. A seven-time runner-up for the CBC/Tilden/Saturday Night Literary Contest, he eventually won second prize in 2007 for “Catching a Snare Drum at the Fraser’s Mouth,” a series of pow-wow poems inspired by his years in 150 Mile House. He won the BC & Yukon Community Newspapers Association Award for Best Arts and Culture Writing in 1996 and the Confederation Poetry Prize in 1991. Tom Thomson’s Shack was nominated for two B.C. Book Prizes in 2000. Eventually Rhenisch received the George Ryga Award for Social Awareness in 2007 for his book, The Wolves at Evelyn, also shortlisted for the Hubert Evans Non-Fiction Prize. Atop basalt columns in Iceland

Until he moved to Campbell River on Vancouver Island in 2007, Rhenisch lived in 108 Mile Ranch and 150 Mile House in the Cariboo–a region that he says begins at the auto-wrecking yard just north of Hat Creek. “The Cariboo is not a place but a state of mind,” he wrote in Winging Home: A Palette of Birds (Brindle & Glass, 2006). His affinity for the B.C. interior led him to contribute to Chris Harris’ book for the Grasslands Conservation Council, Spirit in the Grass: The Cariboo Chilcotin’s Forgotten Landscape (2007). He has continued to collaborate with environmental photographer and publisher Chris Harris, with work on Motherstone: British Columbia’s Volcanic Landscpe, and a forthcoming book on the Chilcotin Arc. He continues his bioregional interests in an environmental blog called www.okanaganokanogan.com. “The Okanagan Valley,” he says, “has a border running right through it. This blog is about erasing that artificial line.”

Rhenisch has since moved back to the Okanagan grasslands, an area he describes as Iceland without rain. “My Canada is built out of fruit trees and black spruce and the Chopaka All-Indian Rodeo,” he wrote in Tom Thomson’s Shack (New Star, 2000). In 2014, he was the inaugural writer in residence at the Okanagan Regional Library.

In appreciation of one of his mentors in Victoria, Robin Skelton, Harold Rhenisch has edited In This Poem I Am: The Selected Poetry of Robin Skelton and he has also edited various non-fiction memoirs including Phyllis Nackomeckny’s Vidh, Lorne Dufour’s Joseph’s Prayer and Vangie Bergum’s Bestamor and Me.

Review of the author’s work by BC Studies:
Out of the Interior: The Lost Country
Rocksalt: An Anthology of Contemporary BC Poetry
Winging Home: A Palette of Birds

One Response to “#25 Harold Rhenisch”