The shortlist for the 2022 George Ryga Award for Social Awareness in Literature, in alphabetical order, is:

* Gough, Barry. Possessing Meares Island: A Historian’s Journey into the Past of Clayoquot Sound. (Harbour Publishing)

* Harris, Michael. All We Want: Building the Life We Cannot Buy. (DoubleDay Canada)

* Morton, Alexandra. Not on My Watch: How a Renegade Whale Biologist Took on Governments and Industry to Save Wild Salmon. (Random House)

The award is sponsored by Yosef Wosk.

In 2003, Vancouver writer Maggie de Vries won the first Ryga Award for her memoir Missing Sarah (Penguin Canada) about her sister who went missing on the Downtown Eastside. In 2004, The Greenpeace to Amchitka: An Environmental Odyssey (Arsenal Pulp Press) by the late Robert Hunter was selected and the award was presented to Robert Hunter’s widow during a Greenpeace crew reunion. In 2005, the winning book was In Plain Sight: Reflections On Life In Downtown Eastside Vancouver (Talonbooks), edited by Leslie Robertson and Dara Culhane.

Information about subsequent winning titles (and other B.C. awards) is available at this link: https://bcbookawards.ca/ 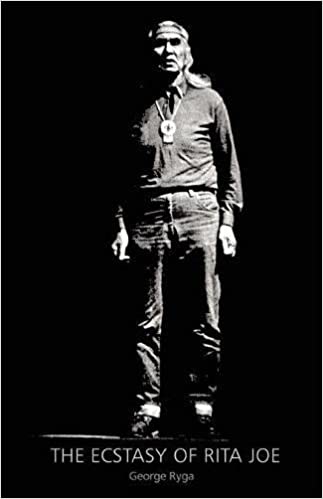 Chief Dan George, who starred in the 1967 premier of George Ryga’s play, is also featured on an early book edition cover.

George Ryga (above right) is considered one of British Columbia’s greatest playwrights.

The turning point for Ryga — and for Canadian drama — was his lyric documentary play about a young Indigenous woman named Rita Joe who comes to the city only to die on Skid Row. Commissioned as a work for Canada’s Centennial celebrations, The Ecstasy of Rita Joe has been critically noted as one of the most moving plays that Canada has ever produced.