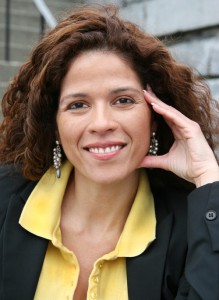 Fluently trilingual in German, Spanish and English, Luisa Maria Celis came to Canada in 2000. Her debut novel in English, Arrows (Libros Libertad 2009), is the first novel to be written and published in English by a native of Venezuela. Arrows has been praised as a quintessential conquest novel for all the Americas. It’s the riveting story of a young priest named Salvador Cepeda who accompanies conquistadors to the New World on his brother’s ship in 1567 as part of an expedition led by Diego de Losada.

Salvador loses his innocence and yearns to regain his soul. The naïve and earnest protagonist is beset by misfortune and intense physical privation, including arrow wounds, but his spiritual crisis (witnessing genocide) amounts to his greatest struggle. Hence the Shakespearean quote from Hamlet as a signpost at the outset: “Whether ‘tis nobler in the in the mind to suffer / The slings and arrows of outrageous fortune / Or to take arms against a sea of troubles / And by opposing end them.”

Halfway through the novel the increasingly disillusioned Franciscan friar falls in love with a down-to-earth Indian woman named Apacuana, mature at approximately fifteen years of age. These two fictional characters play active roles in well-researched historical events. “More of this story is true than most people will want to believe,” the author has said, “which explains why I had to write it.” Celis consulted approximately ninety books over a nine-year period to complete the novel, and made four research trips from Canada.

For her depiction of indigenous peoples, Celis has used two native languages —- Cumanagoto and Panare —- both of which have been extensively studied and are still spoken. “Unfortunately, only a few sentences are recorded from the language spoken by the natives of the valley of Caracas,” she says, “and most of their costumes are also lost. To recreate their way of life I researched the Panare and the Yanomami, though the latter are not Carib.”

Celis also incorporated verbatim records from the Inquisition and used phrases from the tortured and put them into Salvador’s lips. The medicinal uses and methods described in the novel are faithful to the times.

Celis studied St. Francis as a role model for Salvador and researched the Franciscan Order of pious priests known as Observants, while consulting the Vulgata version of the Bible in Spanish.

Most of the conquistadors in Arrows are based on historical figures. Diego de Losada was born in 1511 in the province of Rio Negro in Spain. He came to the New World at age 22 and arrived in Venezuela at age 33, participating in various founding expeditions.

Losada’s expedition to the Caracas valley began in January of 1567. The chieftain Guacaipuro was killed around the outset of 1569 and his final words have been recorded. Battles scenes are embellished accounts, based on records kept by the Spaniards, who impaled of chieftains’ heads on sticks to assert their superiority. There is no set date for the battle of Maracapana, described in the novel, but it is known that it happened shortly after Caracas was founded on July 25, 1567.

The romance angle is secondary in the plot, but gathers momentum as the story slowly builds to its climax. Arrows is not for the prudish. Should Salvador be chiefly loyal to Apacuana, his Spanish comrades, his beloved older brother Bartolomé (a worldly extrovert who has always protected him) or to God? Few copies of Arrows reached bookstores when it was published by a small literary press in B.C. It was never marketed east of the Rockies. The story is actually Volume II of a projected trilogy about two brothers during the Spanish conquest of the Caribbean. Nine months after it was printed by a small West Coast press, the author regained publishing rights. She subsequently rewrote the novel in its entirety, then had it republished in Spanish with a new title, Misionero de Neuvo Mundo (Caracas: Editorial Alfa 2012). The novel was well received in Caracas, where it was printed, but marketing beyond Venezuela was minimal.

Suffering will be second nature for Salvador by the end of Luisa Maria Celis’ debut historical novel, Arrows.

The missionary will be bashed about in a deadly storm, rescued from falling overboard, taken seriously ill, twice skewered by arrows, attacked by a horde of hungry red ants, stabbed in the chest, punched, battered and finally tortured by the folks at the Spanish Inquisition. In between injuries and mishaps, he engages in self-flagellation.

And that list of woes doesn’t include his broken heart. It’s Spain’s Golden Age in the mid 16th-century and the evangelist has left his monastery in Spain to join an expedition sent to re-conquer territory in the Caracas valley. Two previously vanquished expeditions failed to take revenge on the Carib leader, Guacaipuro, who left the original Spanish settlement in ashes ten years earlier.

Despite the physical hardships—or possibly because of them—our embedded priest/protagonist is initially eager to give spiritual support to his fellow Spaniards and convert the savages, resisting temptations of the flesh and denying himself even such a small comfort as sandals. Salvador has to be persuaded to accept a ride on a donkey.

Burdened by high-minded and puritanical intentions, like Don Quixote, the muddling and meddling priest eventually perceives disillusioning truth. During his prolonged epiphany of reason over a two-year period, he comprehends that his Catholic faith is next-to-meaningless and his Spanish comrades are essentially killers after gold. Worse, Salvador discovers he is helpless to change the fate of the so-called New World. Openly opposed to genocide, he tries to intervene on behalf of the Indians long before he witnesses the rape of his love interest, Apacuana—halfway through the novel—by a Spanish colleague.

When Salvador tries to gain the trust of the Indians in Guacaipuro’s village, he is harm’s way. His faithful Mestizo translator Tamanoa is murdered and chopped into pieces; and the Carib chieftain who protects him is blasted away by his Spanish comrades. And that’s NOT giving away the most important part of the story.

There is a surprise ending—involving his brother Bartolomé, the ship captain who brought him to South America on his 400-ton carrack, Isabella—but the reader is most likely to remember Salvador’s jungle love with Apacuana, the late-emerging heroine who saves his skin, leads him beyond temptation, and ultimately skewers his selfishness.

Yes, Salvador is a serious liability in the name of God. But it’s Salvador’s relationship with the ‘wild Aphrodite’ Apacuana [“Apa-kwana”] that leads to the heart of the matter. Far from being your classic “princess” or conveniently-placed nymphet, Apacuana reveals the absurdity of preaching self-sacrifice to native women. Like the men around him, Salvador values honour above fidelity.

“I saw my parents die when those first Spaniards came and settled in the place your people live now,” she says. “Men go to war without caring how much pain they leave in a woman’s heart. We could have retreated into the mountains, but, no; men have to fight. And they die, killing with them the women who loved them. Their honour. That’s all men care about.”

Luisa Maria Celis read 90 books over nine years to make Arrows, the first volume of a projected trilogy. Specifically, Arrows follows the chronicles of José de Oviedo y Baños (1671-1738), a colonial historian, who published the History of the Conquest and Population of the Province of Venezuela in 1723.

Along the way she also had to translate her work from Spanish into English. When she understood her manuscript was too long, she took the advice of her editor and separated the work into two novels.

In the second volume, we’ll learn how the extroverted Bartolomé loses his sweetheart Paloma, marries her sister and then discovers he has a ten-year old son with Paloma.

Meanwhile, there’s room for quibbles: The Caribs are touted as formidable foes, but later Salvador argues the Caribs don’t have a ghost of a chance against the horses and technology of the conquistadors.

As well, Salvador proves himself remarkably gifted as a linguist, somehow gaining fluency in a new language after only a few months in Apacuana’s village.

When you do the copious amount of research that this author has sweated over, it’s easy to get overly caught up in the facts, but she manages to balance fact with fiction and achieve readability and credibility.

The religious side of Salvador is highly believable and the battle descriptions are vivid. Arrows is a riveting and informative adventure romance—perhaps ideal for a film—and not without philosophical depth.

“The hardest thing about writing the book was the price I paid for trying to tell the story with complete honesty,” she says. “This book changed me. I started as a devout Catholic and ended up a free-thinker.”

Good for this plucky little publisher for taking chances on new Canadian writers who operate beyond the Anglophonic mainstream.

The following interview was recorded prior to the publication of Misionero de Neuvo Mundo (Caracas: Editorial Alfa 2012)
Interview (2009)