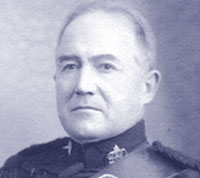 Major J.S. Matthews, who was Vancouver’s foremost civic historian prior to Chuck Davis, lived at this address for nearly 50 years, flying the Union Jack on Sundays and holidays. He also lived at 1343 Maple Street. Fiercely protective of his work, Matthews remained an avid and cranky local history maven and collector until his retirement at age 91 in 1969. He died the following year, at age 92. Unofficially and officially, James Skitt Matthews had been the City of Vancouver’s chief historian for almost 40 years.

Born in Newton, Wales, on September 7, 1878, James Skitt Matthews attended school in Auckland, New Zealand where he also worked as a timber clerk. He sailed to San Francisco in 1898 and travelled up the coast with brief stays in Tacoma and Seattle. In Victoria he met his fiancée from New Zealand, Valentia Maud Boscawen, and they settled in Vancouver in 1899. That year Mattthews began his 20-year career with Imperial Oil as a clerk, travelling salesman and manager. In 1900 the couple had twin boys, followed by the birth of another son soon afterward. Matthews was bedridden in the Vancouver General Hospital for three months with typhoid in 1902. Having joined his local militia unit in 1903, he served within the militia that helped to control and suppress the Nanaimo miners’ strike of 1913. He fought in Europe with the regular armed forces from February, 1916 to May, 1918, during which time he achieved the rank of Major–having led trench warfare attacks near Ypres. Thereafter he preferred to be known as Major Matthews.

Until 1924, Matthewes operated a scow and tugboat business, partially with his son Hugh who was killed in an elevator accident, after which Matthews briefly managed Canada Western Cordage. He twice ran unsuccessfully for the park board in 1927 and 1928, but was able to become active in the Arts, Historical and Scientific Society. As an amateur historian he began to fill his Kitsilano home with historical items until he was able to transfer some of his collection of documents and materials to a City Hall attic room in 1931. Dark and dirty, this room where he worked as a volunteer archivist was known as the Deserted Chamber.

Matthews frequently complained and shifted his work to three other locales before it was permanently relocated to the civic archives at Vanier Park. Matthews fought with the city over ownership of his materials. After the city began paying him a stipend of $30 per month, the city took the position that his archive belonged to the city, whereupon Matthews balked and removed his collection to his home. After several weeks of acrimony, he agreed to return the materials to City Hall in return for gaining his formal title of City Archivist in 1933.

Soon after WW II, he became estranged from his first wife, Maud, and their 20-year marriage ended. He remarried his nurse from his bout with typhoid, Emily Eliza Edwards. Her widowed sister Mabel took over as his housekeeper after Emily’s death, but Mabel packed her bags and left him in 1964. Two more housekeepers followed.

“It is evident,” writes his biographer Daphne Sleigh, “that James found it a great deal easier to achieve compatibility with women than with men. His misunderstandings with anyone of the female sex were rare; his aggressive behaviour was almost always directed toward men. Even in the case of his break with Maud, it was she who had initiated it, yet he who wanted her back. His unquestioning love of his mother had instilled in him an image of womanhood as the sweetly guiding complement of man, and the effect of this conditioning was to predispose him to be sympathetic to and uncritical of the female sex. His views were very traditional. He did not approve of flirtatious women, and was said to have been rather shocked by any hint of sexy behaviour.”

Among Matthews’ many leavings included his Conversations with Khahtsahlano (Vancouver, 1955) recording the words and memories of Chief August Jack Khahtsahlano, and a 36-page compilation entitled Linking the Atlantic to the Pacific; Ocean to Ocean; Montreal greets Vancouver 23rd May, 1887 (City Archives, 1968). The civic archives at Vanier Park, near the Vancouver Planetarium, are named in his honour.