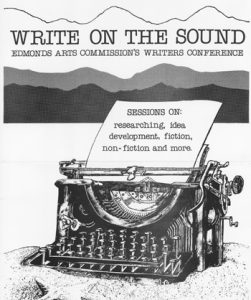 The initials WOTS in Canada usually stand for Word On The Street.

But drive just south of Blaine and it’s different.

Sort like the difference between arbutus trees in B.C. and madrona trees in Washingston state.

Write on the Sound writers’ conference (WOTS), presented the first weekend in October at the historic Frances Anderson Center in Edmonds WA, is a unique, high quality, affordable conference focusing on the craft of writing. Over 30 workshops and panel discussions are presented for all levels and interests, including valuable information regarding today’s writing and publishing industry. A limited admission of approximately 275 attendees makes WOTS the perfect place to spark your creativity, share ideas and network with other writers.

Established in 1986 by the City of Edmonds Arts Commission as a one-day event, the conference celebrates its 31st year in 2016. WOTS attracts presenters and participants from all over the Northwest, the U.S. and from abroad. The conference is held at the Frances Anderson Center, a historic 1920s era school building that’s been converted to a multi-use recreation and cultural programs facility. If you have questions regarding ADA accommodations, please contact our offices. Edmonds is a town of 40,000 located on the shores of Puget Sound in Snohomish County, Washington State, about 20 minutes north of Seattle, and 45 minutes from SeaTac International Airport. The home to one of the six ferry terminals between Tacoma and Everett, Edmonds has breathtaking views of the water and the Olympic mountains to the west from its charming downtown. Enjoy wandering through various boutiques, specialty shops and art galleries during your stay. Grab a bite at any number of the downtown’s restaurants, cafes and pubs. Visit the historical museum, the Cascadia Art Museum, attend a movie at the historic Edmonds Theater in the evening, or a concert at the Edmonds Center for the Arts.