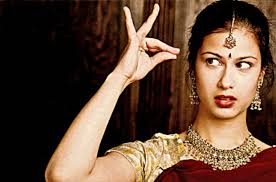 The award-winning actress, playwright and dancer Anita Majumdar grew up in Port Moody, where she did not speak English until the age of six. The daughter of Hindu Bengali parents, Anita has trained in classical dance including Bharata Natyam, Kathak and Odissi. After some high school theatre performances, she first performed in public at the Port Moody Inlet Theatre in 1997. Anita Majumdar attended UBC where she earned degrees in English, Theatre and South Asian Languages. She then went on to attend the National Theatre School of Canada, graduating in 2004. Majumdar first gained public recognition when she wrote a one-woman play, Fish Eyes, about a classically trained Indian dancer whose love of Bollywood movies does not stop her from wanting to be like the rest of her Canadian high-school friends and developing a crush on a popular boy who barely notices her.  Fish Eyes has toured across Canada and internationally for many years and has toured to high schools as part of “Kid’s Helpline” and the “411 Initiative Tour Program” to raise self-esteem in young teenaged girls. While performing Fish Eyes on stage, Majumdar was noticed by a Vancouver producer. Shortly after, she was cast in the CBC television film Murder Unveiled about a Canadian-Sikh beautician who was murdered by her family for secretly marrying a Indian rickshaw driver. Majumdar won the Best Actress Award at the 2005 Asian Festival of First Films for the role. She subsequently played the character of Emerald in Canadian director Deepa Mehta’s adaptation of Salman Rushdie’s Midnight’s Children. Now she’s had a trilogy of plays published as The Fish Eyes Trilogy- Fish Eyes, Boys With Cars, Let Me Borrow That Top (Playwrights Canada $$24.95), available January 15. These are the scripts for coming-of-age solo shows that follow the lives of teenage girls who attend the same high school and process their real-life dilemmas through dance, while exploring the heartaches of youth and the meaning of heritage. 9781770913271  http://www.playwrightscanada.com/index.php/fish-eyes.html