Ormsby #113 Why estuaries are vital

Salmon, trout and char all depend on transitions between fresh and saltwater. 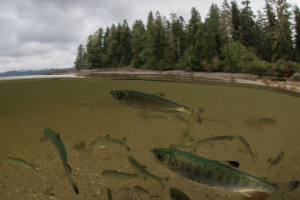 After 35 years of research, Colin Levings focusses on 18 species of salmonids and almost 200 B.C. estuaries to make the case for conservation.

REVIEW: Ecology of Salmonids in Estuaries Around the World: Adaptations, Habitats, and Conservation Colin Levings’ encyclopedic treatment of how sea-going salmon, trout and char make their transition from fresh to salt water (and the other way) at the river mouth, Ecology of Salmonids in Estuaries Around the World: Adaptations, Habitats and Conservation (UBC Press 2016) provides case histories dealing with BC estuaries and species while incorporating conservation issues. That is also an on-line appendix that provides a primer on salmonids and estuaries for the citizen scientist.

“Throughout history,” writes Colin Levings, “both estuaries and salmon have played an important role in human civilization. River mouths linked interior and coastal peoples [and] salmon were a link between the ocean and rivers, providing a steady supply of protein-rich food to estuary dwellers, who could catch the fish with little effort in the constricted river mouths.”

Reviewer Bert Ionson, formerly of Fisheries and Oceans Canada, finds Levings’ magisterial Ecology of Salmonids in Estuaries Around the World: Adaptations, Habitats, and Conservation “a comprehensive and readable resource for anyone interested in the estuarian environment.” – Ed.

A river estuary may seem a drab and uninspiring landscape with mudflats exposed at low tide or it may resemble a field of lush and long grass responding to the flow of surrounding air currents. Understanding these interactions is key to the survival of a wide variety of species that are significantly important to the social and economic fabric of communities located within or near to estuaries and beyond.

The purpose of Colin Levings’ Ecology of Salmonids in Estuaries Around the World is “to introduce and orient present and future researchers, students, and practitioners to the study of salmon conservation in estuaries.”

By focusing on eighteen species of salmonids, and drawing upon research and personal observations from almost 200 estuaries in British Columbia and around the world, this book provides vivid and easily understood explanations of these interactions.

Dr. Levings draws upon more than thirty-five years of field and lab research as well as the work of many other scientists. References are clearly annotated and a link to a website containing further supporting documentation is provided.

The book seamlessly transitions from descriptions of the different types of estuaries, based on their morphological composition and specific attributes, to the behaviour of several salmonid species including their interactions with other species within estuarian environments. Described in some detail are factors for “fitness” or reproductive power of salmonid stocks within estuaries. Fitness, in this case, refers to the factors that contribute to the growth of individuals within a population while they are in the estuary, features that support osmoregulatory adjustment and biotic interactions such as competition and predation.

Entire chapters are devoted to the description of these topics, which are then used in follow-up explanations of the effect of habitat change and loss within estuary communities.

I found the chapter on smolting and osmoregulation essential for understanding the ability of salmonids to move from freshwater to saltwater environments and back again — and in some cases more than once.

Levings reviews the impact of estuarian physical features such as beaches, channels, vegetation, and artificial habitats, as well as water quality parameters (temperature, salinity, dissolved oxygen, turbidity, and pH). This is particularly helpful in his later chapters dealing with future considerations for conservation.

Unfortunately, because of the level topography of most estuaries, they are often seen and used as ideal development opportunities including marinas, parking lots, log booming grounds, and even airports. An airport has been built on the Courtenay River estuary.

Ecology of Salmonids reviews many of the challenges experienced when development occurs within an estuary, as well as upstream activities that have an influence on estuarian interactions.

Owing to dissimilar processes experienced at different stages in estuaries when compared to freshwater or ocean environments, sampling methodologies useful in freshwater or the ocean are not suitable to estuaries.

Calling on a lifetime of estuarian studies, Levings details adaptations to field study techniques and strategies, and their limitations, employed in British Columbia and around the world.

Levings concludes with recommendations for further study to complement the current body of knowledge and offers considerations for planners considering development and/or restoration activities within estuary boundaries. A log dump and booming ground on the Bear River estuary near Stewart B.C.

Ecology of Salmonids in Estuaries Around the World is a comprehensive and readable resource for anyone interested in the estuarian environment.

It provides detailed descriptions of the morphology of estuaries, biological interactions within estuaries necessary for salmonids, and the importance of protecting, maintaining, and restoring estuaries to ensure healthy salmonid populations. Bert Ionson was an employee of Fisheries and Oceans Canada for over thirty years, twenty of which were spent as a Fishery Officer in B.C.’s central coast, the Yukon, and Squamish. He spent a number of years administering First Nations fisheries programs within the Fraser River and concluded his career as the Regional Salmon Manager. He remains keenly interested in fisheries-related activities for the Pacific Commercial Licence Appeal Board and the Canadian Pacific Sustainable Fisheries Society promoting Marine Stewardship Certification. He resides in Squamish with his ever-patient wife Diane. He volunteers with the Canadian Red Cross and, during ski season, with Whistler Olympic Park.