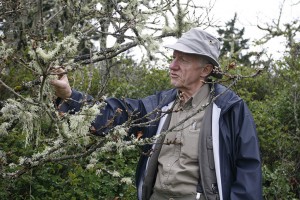 Kem Luther’s book, Boundary Layer (Oregon State University Press $22.95), uses a multifaceted approach to explore the point where air meets earth. This point, a layer that Luther calls the stegnon, is home to a host of life including lichens, mosses, ferns, fungi and diminutive plants. Boundary Layer reveals an ecosystem as complex as any found on earth, one that shifts with every temperature and condensation change.  The book also focuses on the stegnon’s scientific community. Luther explains that the “narrations in Boundary Layer owe a great debt to the army of biologists who spend their lives investigating the humble inhabitants of the regions just above the soil line. Without their research, all would be speculation.” In pursuit of the boundary idea, Luther’s book also explores the borders between culture, science, nature and the humanities.