When We Rise lite 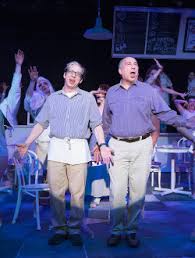 In 2009, Dustin Lance Black won an Academy Award for Best Original Screenplay for the bio-pic Milk about the courageous and tragic life and death of San Francisco gay rights politician Harvey Milk—inspired by Rob Epstein’s documentary The Times of Harvey Milk. This year he has penned a breakthrough ABC series called When We Rise.

Sabotaged by a deluge of commercials throughout, and burdened by a weak premiere segment, this noble attempt to make a Roots-like popular history about the rise of the LGBTQ human rights movement in the United States has some superb acting in later segments. Critics have been unkind after its awkward, docu vs. drama opening segment, but the overall content is well-worth seeing.

Black believes its greatest value will be to educate a new generation as to what the hell happened – Hey, ever heard of the AIDS crisis? – for decades to come and so the ABC ratings don’t matter much. Already more people have seen the series than ever saw the movie Milk.

Getting the message out, getting the work done, breaking down the barriers, that’s the social victory. If the artistic product has some flaws, well, you just try getting something like that made, pal. When President Bill Clinton became the first President to deign to view the gigantic AIDS quilt, the Clintons didn’t stop and complain about the artistry of individual squares. It was the collectivity of that representation of immense suffering and persecution that became the artistic statement. Elbow Room Café: The Musical is When We Rise lite. It bites off a tiny segment of gay rights history in Vancouver as a homage to an enduring gay couple who had the guts keep AIDS patients as employees during the plague, and who continue to playfully extort money from customers in support of the Loving Spoonful program for people with AIDS.

To raise money, one of them infamously has a schtick, berating the customers like the soup Nazi in Seinfeld—and so playwright Dave Deveau and director Cameron Mackenzie, a gay couple who have been Elbow Room customers, decided to honour the queer, iconic significance of that West End restaurant with a campy send-up.

If you saw the first iteration of Elbow Room Café produced at Langara’s Studio 58 a few years back, you might be disappointed to see that Deveau and Mackenzie have not deepened our understanding and appreciation of the two main characters. How did these two main characters meet? How did their parents respond to their union? Who was the cook? Why did the restaurant have to move? Were they fifty-fifty owners?

It’s an insufficient ‘buy-in’ to say, gee, this place is iconic, let’s make a play that says it’s iconic. That might be a good enough premise for funders, but it’s insufficient for a live audience. The opening number was an unnecessary clunker in the first iteration; it still clunks. There is not enough at stake in the central relationship. The first act bogs down in repetition.

To bring this laudable extravaganza-on-the-cheap to the next level, the creators needed to stop and ask themselves how the audience is responding, and what the audience is thinking. Do we really need those other characters as distractions, miming slow motion eating, as Christine Quintana beautifully delivers the show’s only heart-stopping number, desperately trying to reach out to her estranged lover? The second, much shorter act mostly delights us with the verve of younger cast members liberated from three static tables in the first act. Emma Slipp earns the first burst of spontaneous audience approval when she escapes from the strait-jacket of an underwritten part for a bombastic, memorable number that we think was called Let The Girl Eat! (This production lacks a program that lists the songs, so it’s difficult to concisely reference all the highs and lows.) It’s about a cafe, so a third iteration–and we hope there is one–could consider starting the show with it.

Synthia Yusuf does a superb job playing a stupefied drunk for most of the show—not as easy as it might sound—but when it comes time for her one moment in the spotlight with a song, which she begins with much grace, she is submarined by a decision to turn her song into a group number after about thirty seconds. She is allowed zero personality. We never get to know who the heck she is. So why should we care about whether or not—like Sterling Holloway in My Fair Lady—she gets herself to the church on time for her wedding?

Nathan Kay lends this under-choreographed show a boost with much-needed physical grace and fluidity—but who is he and where the heck does he come from? As a carefree party animal he could have served as an overt example of a younger gay generation that fails to fully understand and respect the past, thereby giving the audience some reason to care about co-owner Bryan’s funk/depression/anger/angst.

In yet another under-written part—as a contrite lesbian who got pregnant on the rebound after she placed an ad on Craigslist—ever-watchable Olivia Hutt elicits more sympathy from the audience than the lead couple elicit with their lion’s share of the show. When co-owners [pictured above] Patrice (Allan Zinyk) and Bryan (David Adams) embrace or kiss, we don’t believe it for a second. No chemistry means no empathy.

On his own Zinyk, as the lovable, foul-mouthed castigator, is frequently sublime as the heart ‘n’ soul of this production. He/she shines and galvanizes in his climactic drag number as a man who supposedly can’t sing. Once again, as with Slipp’s number, the audience feels relieved and surprised. So THIS is what this show could be!

We so want so much for this show to succeed, to move beyond some x-rated sitcom banter and stereotypes. It’s essential to keep an audience caring what happens next. Composer and co-lyricist Anton Lipovetsky, without question, is one of the bright lights of Vancouver theatre, and many of the clever songs he’s co-written with Deveau are engaging and amusing, but the show’s creators have seemingly asked him for too few songs that tug at our heartstrings and allow us to get closer to the individual characters.

So it would be easy to dismiss Elbow Room Café as a roller-coaster of moments. There’s too little to care about continuously, to hope for, beyond didactic explications about the past and repeated discussions about whether or not the long-together owners will ever get married. Oops, they forgot the essential ingredient of romance in a musical…

If you were to see this show with a gay person under age thirty—you would be very pleased you went.

Elbow Room Café should not be solely judged as to whether or not it would ever make its creators a million bucks on Broadway. When We Rise had millions behind it, with Ellen DeGeneres commercials; Elbow Room is a musical that can only afford a three-piece band. But, like When We Rise, it’s easy to conclude the social value of this show overrides its shortcomings. Whether you’re gay, straight are part of the They Generation, it’s a helluva lot better to learn something about the history of gay society in Vancouver than zip.