#1 Welcome to The Ormsby Review

Richard Mackie and BCBookLook are teaming up to provide a new vehicle for serious writing about B.C. 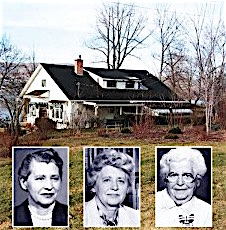 Margaret Ormsby's lakefront home, where she chatted with Richard Mackie, torn down in 2014.

The Ormsby Review will be named after Margaret Orsmby, the venerable historian who often met with Mackie for tea and talk during her retirement near Vernon.

Many estimable pre-internet figures are vanishing from public knowledge due to limited information about them on the internet. Who today in British Columbia has heard of F.W. Howay or W.K. Lamb? That’s just one of the reasons why editor Richard Mackie and I have named our new journal for reviews about B.C. history and literature after historian Margaret Ormsby.

Richard will consider submissions from both academics and non-academics.

With your curiosity and readership, we hope to build a boundless forum for serious book reviews and commentaries about B.C. society.

We begin with a brief memoir from Richard, in honour of the publication’s namesake.

“Tea with Margaret Ormsby in her living room,” he writes, “was always a memorable and formal occasion.  From her comfortable armchair, her soft voice quavered like a kettle simmering on a back burner. Her sentences ended with a gentle wheeze, as though someone had suddenly let the air out of her. ”

I got to know Margaret Ormsby when I was a Master’s student in history at the University of Victoria. In those days she also happened to be a neighbour in the Coldstream Valley, near Vernon, of my cousin Paddy Mackie, who would often see her at local historical events and gatherings and at the Vernon Museum, where he volunteered.

At first my acquaintance was mostly literary: I knew her magnum opus, commissioned for the 1958 centennial and called simply British Columbia: A History (Macmillan 1958), as a largely political history of the province that had never been surpassed.  I also owned her two most-recent books, A Pioneer Gentlewoman in British Columbia: The Recollections of Susan Allison (UBC Press 1976) and the Fort Victoria Letters 1846-1851 (Hudson’s Bay Record Society 1979).

This was back in the 1980s when Margaret was working on her history of Coldstream Valley, published in 1990 as Coldstream: Nulli Secundus by Friesen after being turned down by UBC Press. I’m ashamed to say that, even though Paddy talked about Margaret a lot, I hesitated to introduce myself for several years because a professor of mine at UVic, a quantitative historian, had once sneered at Ormsby’s British Columbia as “classic seat-of-your-pants history.”

Fortunately, as I got older, I learned to make up my own mind about books and people, and I discovered what many already knew: that her work was accurate, reliable, and often inspired. Eventually I asked Paddy if I might go and meet her. He picked up the phone and called her, chatted for a minute and then handed the phone to me.

She invited me over that afternoon for tea, which in Coldstream means 4 p.m.

Only one property separated the Mackies and Ormsbys, so I was soon at her house on the lakefront beside a fragment of what was once a large orchard. I walked up to the front door and knocked.  A minute later the door flew open and an annoyed elderly woman appeared. She asked me sharply why I hadn’t used the side door, as she had requested. This was classic Margaret Ormsby. She had mistaken me for the gardener’s boy.

I introduced myself. Needless to say she was as mortified as I was alarmed. I was then about 26 years old, but to her I must have seemed younger. She was in her late 70s or early 80s. I called her Margaret, because that’s what Paddy did, and she seemed fine with being called by her first name. “Dr. Ormsby” seemed too formal.

Our meetings thereafter usually consisted of historical chat and tea. She wanted to know what was going on at UVic and who was writing what. She told me how, in the 1950s, she had been given a private desk in the stacks of the BC Archives and how upset she was that this arrangement had never been renewed.  Her network extended to one of my professors, Patricia Roy, who had been her student at UBC. I could see that Margaret missed the collegiality and the chinwag that active historians enjoy so much.

A year or two later I transferred to UBC to begin my Ph.D in history and geography, and again she wanted to know the news of old students like Cole Harris and Keith Ralston, and of ex-colleagues like Margaret Prang. She wanted to know who was working on the colonial era, or who was doing B.C. political history, and so on.  I never mentioned the nickname for her that had arisen during her long tenure as head of the UBC history department. Her middle name was Anchoretta and somehow that led to her being referred to mischievously as Chairman Mao.

Visiting Margaret became part of my Coldstream routine. Once, when I was a doctoral student, I found myself telling her about my troubles with a certain member of my committee at UBC — a narrow, dogmatic, and insecure scholar who punished students for not doing things exactly his way.  Margaret listened carefully and at the end said “Such a shame! Doing a PhD is quite hard enough on its own without having to deal with nonsense like that.”

“For tea, she always served pieces of buttered toast cut in half diagonally. I found this a pleasant but somewhat puzzling habit until, some years later, in a novel by Anthony Trollope I found a reference to exactly the same combination of afternoon buttered toast and tea. I was a rough British Columbian. Her tea must have been a cultural artifact: toast and tea her Victorian parents’ ideal of mid-afternoon sustenance. Once, she took me up to the large open attic room that served as her study. The walls were lined with books and multi-paned windows that looked down to the lake. It was a scholar’s den and I envied it.  She took great pride in her large collection of the pottery of Axel Ebring, the Danish interwar craftsman known as “The Vernon Potter.” She told me that Ebring had collected certain rocks from the ranges around Vernon and ground them down to add to his glazes.

She often shared her early memories of my Coldstream cousins, the Mackie and Marle families, who ran a boys’ boarding school in the Valley.  Once, as a girl, she was walking along in the snow on a bitterly cold day when my great aunt Grace Mackie came by in a sleigh and stopped beside her. Margaret was born in 1909, so this must have been during the First World War. Grace invited her up into the seat and shared her warm covering with her, which I recall was a buffalo robe. This simple act of kindness made a deep impression on Margaret. Indeed it was one of the first of many memorable things she told me.

I used to think I was the only historian who ever visited her house on Kalamalka Lake, but over the years I have met old students of “Dr. Ormsby” who also made annual pilgrimages.  I am glad that I was not alone in appreciating this kindly, inspiring, enthusiastic, supportive, and amusing woman whose lifelong passion was the British Columbia past and the historical profession that studied it.

In 1996, Margaret Ormsby fell and broke her hip and was transferred to the Vernon Hospital. Paddy and I went to visit her there, one of us sitting on each side of her bed. We talked for ten minutes. I wanted to talk more but Paddy had another appointment, and I’ve always felt guilty that I couldn’t stay longer.

I remember how Margaret looked at me as I walked away, as though she hadn’t finished either. She died soon after.

Twenty years after her death, The Ormsby Review gives us a chance to continue our conversations about British Columbia.

Few other scholars have been so identified with the history of British Columbia as Margaret Ormsby. Published in 1958 to celebrate the B.C. Centennial, her British Columbia: A History was immediately a bestseller–at $4.75 per copy–and it remained the standard reference work for several decades prior to new histories by Martin Robin, George Woodcock and Jean Barman.

Born in Quesnel on June 7, 1909, Ormsby grew up on a Coldstream fruit ranch and attended high school in Vernon. Hers was one of the first graduate degrees conferred by the new UBC History department when she received her M.A. in 1931.

As a female academic, she was also a groundbreaker. She received her Ph.D from Bryn Mawr College in 1937, having earned a Bryn Mawr scholarship, but no positions were available in Canada. She taught at a private San Francisco high school until she could join McMaster University in 1940.

Ormsby overcame departmental discrimination against female scholars at both McMaster and UBC, where she began to teach in 1943. She finally attained the status of Full Professor in 1955. She became Acting Head in 1963, then chaired the department for ten years until her retirement in 1974.

Ormsby returned to live at the family home in Coldstream, continuing to write. Her local history of Coldstream, published when she was 81, boldly declared her hometown was ‘nulli secundus‘, second to none.

Along the way Ormsby became the second female president of the Canadian Historical Association in 1965. She chaired the Historical Sites and Monuments Board of Canada and the B.C. Heritage Advisory Board. She was a member of the Board of Governors at Okanagan College from 1980 to 1985. A Margaret Ormsby Doctoral Scholarship in B.C. History was established in 1993. There is a university-level Margaret Ormsby Prize for the Best Essay on British Columbia History.

Long active in the Okanagan Historical Society, Margaret Ormsby died in her Coldstream home on November 2, 1996 at age 87.

In 1993, a group of graduate students, assisted by the British Columbia Heritage Trust and other historically minded supporters, created the Margaret Ormsby Scholarship project. A fund for donations was established in support of scholarships which celebrate and recognize Dr. Ormsby’s contributions, ensuring that the work she pioneered continues. To this end, in 1997 the group officially established the charitable organization called The Society for the Promotion of B.C. History to help administer the fund in association with the Vancouver Foundation.

The lakefront house in which Margaret Ormsby was raised in Coldstream, and where she also resided in her retirement years, was demolished in 2014 after the extensive property had been listed for sale for $5.9 million and sold for an undisclosed sum that summer. Ormsby’s will had stipulated that the local district should have the first opportunity to purchase her property but the offer made by the town of Coldstream was refused. 38 Responses to “#1 Welcome to The Ormsby Review”