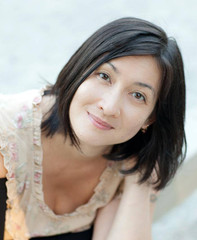 Brandy Liên Worrall will read from her new memoir What Doesn’t Kill Us at the Heartwood Café in Vancouver on Thursday. Her memoir of surviving cancer and her mixed heritage upbringing, What Doesn’t Kill Us (Rabbit Fool Press $21.99), finds comparisons between war and cancer, exploring the potential link between her life-threatening cancer and her parents’ exposure to Agent Orange in the late 1960s. The evening is presented in partnership with the Callanish Society. Half the book sales ($20/copy) for the evening will be donated to Callanish Society, a small non-profit organization dedicated to supporting individuals and families deaing with cancer. For more information, visit  http://brandyworrall.com/media-kit/ Brandy Liên Worrall-Soriano grew up within in an Amish community in Pennsylvania, “which isn’t as exotic as it sounds,” she says. “As an epileptic child of an overprotective Vietnamese mother and a substance-loving American father—both of whom were traumatized during the Vietnam War where they met and got married—I wasn’t allowed to go out of the house very much. So I stayed home and paid attention to things everyone was trying to ignore or forget—mostly, what happened during this war no one was supposed to talk about but which brought us together as a family.”

In 2003, with two children, she moved to Vancouver with her first husband, Henry Yu. While at the MFA programme in Creative Writing at UBC, she explored the family histories of her own Vietnamese and Pennsylvania Dutch families. Her dreams of being a professional writer were detoured when she was diagnosed with stage III multifocal Triple Negative Breast Cancer (BRCA2-positive). She recovered but felt traumatized by the experience. “I started understanding better what my parents must have felt during my childhood—the isolation of having gone through a horrifying experience that most of one’s young adult peers could not even imagine. And all those things I paid attention to when I was a kid—those things that everyone else tried to ignore or forget—started making more sense.”

She obtained her MFA in Creative Writing from UBC in 2012. She previously edited Finding Memories, Tracing Routes: Chinese Canadian Family Stories (2006) for the Chinese Canadian Historical Society of British Columbia. It contains eight personal stories of family life with a preface by Jean Barman. Henry Wu contributed the afterword. The volume is dedicated to Edgar Wickberg, whose vision and leadership helped create the CCHSBC. She has also self-published numerous poetry titles under her imprint, Rabbit Fool Press, which also produces handmade limited-edition chapbooks for poets and short story writers.