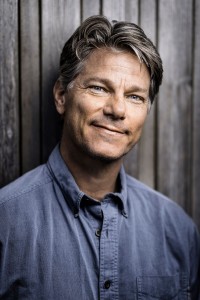 The Jaguar's Children, John Vaillant's debut novel, is a gripping survival story about an illegal border crossing attempt. A man named Hector is trapped inside a water tank with only a cel phone.

John Vaillant’s grandfather wrote the first history of the Aztec nation and Vaillant has lived in Oaxaca, Mexico, for a year. That’s where a fictional character, Hector, inexplicably entered his head, telling Vaillant he was trapped inside the empty tank of a water truck, trying to illegally enter the United States…

Vaillant found myself drawn into writing a novel about the predicament of Hector and his unconscious travelling companion from Oaxaca who is carrying important information to the U.S. Both are stranded and abandoned by people smugglers. In this riveting debut novel called The Jaguar’s Children, Hector finds a name in his friend Cesar’s phone–AnniMac–and sends messages to this unknown person, pleading for rescue. Over the course of four days, as water and food run low, Hector relates the story of why he and Cesar entrusted their lives to the “coyotes” or people smugglers who have left them to die.

Vaillant describes his two central characters as “accidental spokesmen for the tumultuous changes” that are occurring in Mexico, in particular, and worldwide in general, as economic divides increasingly have deadly consequences for people in have-not societies.

His first book, The Golden Spruce, won the 2005 Governor General’s Award for English Non-Fiction, the 2006 Pearson Writers’ Trust Non-Fiction Prize and the 2006 Roderick Haig-Brown Regional Prize. It was also shortlisted for the 2006 Kiriyama Non-Fiction Prize and the second annual British Columbia Award for Canadian Non-Fiction in 2006, making it one of the most prominent debuts in British Columbia literary history. It describes how a former logger named Grant Hadwin, in January of 1997,  plunged into the Queen Charlotte Islands’ Yakoun River, towing a chainsaw behind him. The timber-scout-turned-activist worked in the darkness for hours, methodically cutting down K’iid K’iyaas, a “Golden” Sitka Spruce that was more than 300 years old. John Vaillant first wrote about Grant Hadwin and the Golden Spruce for The New Yorker. This article led to the publication of The Golden Spruce (Knopf $35) in which Vaillant weaves the story of Hadwin’s crusade and troubled past into a larger history of the Haida, the fur trade and the West Coast logging industry. Conserved by MacMillan Bloedel, the 50-metre-tall Golden Spruce represented to Hadwin the hypocrisy of the logging industry. Before he disappeared under suspicious circumstances, avoiding being sentenced, Hadwin also dismissed the relevance Vancouver Island’s Cathedral Grove as merely a “circus side-show” and a “corporate set-aside.” “We tend to focus on individual trees like the Golden Spruce while the rest of the forests are being slaughtered,” Hadwin told a reporter from the Queen Charlotte Islands Observer. “Right now, people are focusing all their anger on me when they should focus it on the destruction going on around them.”

In 2011, Vaillant received British Columbia’s National Award for Canadian Non-Fiction for his investigation of events in Siberia regarding a rare tiger that was killing people, The Tiger: A True Story of Vengeance and Survival. Like The Golden Spruce, this story uses a newsworthy story as the basis for an expansive look at social issues, particularly conservation and ecology, revealing the atavistic links of technological man to the wilderness and other species. The Tiger also received the Hubert Evans Non-Fiction Prize.