Under Vancouver gets upbeat response

Bill Jeffries applauds Under Vancouver 1972-1982, including an interview with William Gibson. 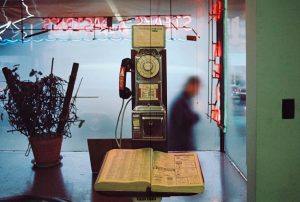 Hong Kong Cafe, 1975,an image from near the outset of Greg Girard's international career.

Greg Girard’s photos of pre-Expo Vancouver taken from 1972 to 1982 are in the same league as Fred Herzog’s imagery, only darker.

including interviews with William Gibson and David Campany