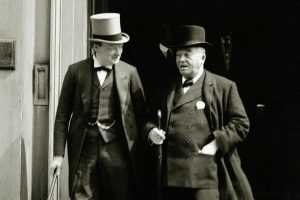 Writing in the Times Literary Supplement, Jan Morris has declared Barry Gough’s dual biography about the early 20th century relationship between Winston Churchill and Admiral John Arbuthnot Fisher as “enthralling” and “a work of profound scholarship and interpretation.” Gough has investigated how the two friends clashed over World War One strategies in his 600-page Churchill and Fisher: Titans at the Admiralty (Seaforth £35 / Lorimer $39.95). Gough delves deeply into the collisions of their temperaments, describing the work as “an inquiry into . . . the role of personality and character in the making of history” chiefly when Churchill became First Lord of the Admiralty, the Navy’s political chief, and Fisher was its First Sea Lord, its professional chief. The book chiefly arose from access to Jacky Fisher’s papers. 9781459411364