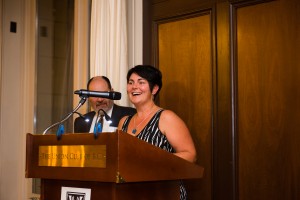 Twelve stories in The Pull of the Moon (Brindle & Glass $19.95) by Julie Paul [shown at podium] have won the twelfth annual $5,000 City of Victoria Butler Prize presented by City of Victoria acting mayor Chris Coleman and sponsor Brian Butler at the Union Club. “I’m so grateful, I’m pinching myself,” she said.

More than half of Paul’s stories delve into dark territory, but she read one story with a happy ending at the gala. “That can be considered verboten in CanLit,” she said, “So I gave a spoiler alert to the audience. But I neglected to mention that my characters end up in an art gallery, looking at a penis sculpture sporting a handlebar moustache.” For her winning title, the Ottawa Valley-raised massage therapist examines relationships between lovers, families, friends, and the cost of secrets kept and then revealed. “Dojo Daycare is written in rhyme–a form that isn’t always popular with reviewers–so I’m glad it has gone over so well,” says Tougas.

Dojo Daycare starts one morning when six young, black-garbed ninjas are dropped off at daycare. As soon as their ninja moms and ninja dads leave, the neophyte ninjas push and pull, bust and break, and generally turn the place upside down in a full-blown ninja riot.

“Great ideas are like ninjas,” he says. “They sneak up on you and then… KABOOM! KAPOW! Sometimes a drawing will inspire the idea for a story but more often than not, the initial idea precedes any visual. In the case of Dojo Daycare, because I was writing in verse, the story needed to be quite thoroughly worked out before I began the storyboarding.”

None of the junior ninjas heed the master’s repeated mantra of honour, kindness and respect – until one little ninja steps up and rallies his ninja pals to undo all the damage that they have done just before their parents arrive for pick-ups. A sequel, Dojo Daytrip, has just been released and the third title, Dojo Surprise, is due in the spring.