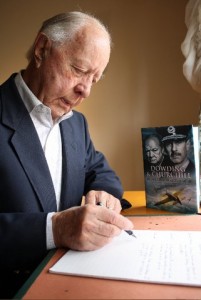 Jack Dixon’s The Barn (Victoria, Friesen Press, 2015) describes the ordeals and bravery of the Mollens, a family of nine in Arnhem, Holland, after their country was invaded by the German army in May of 1940. It is based on interviews that Dixon conducted with members of the Smollen family.

Forced to work for the Nazi Occupation forces because he owned a garage, the father uses his wits to resist as best he can, helplessly watching as Jewish neighbours are brutally arrested. With the onset of the Battle of Arnhem in September of 1944, the entire civilian population is forced to evacuate their homes. After three days of walking, they take refuge in an empty barn for the remaining eight months of the war. During the “Hunger Winter” of 1944-1945, the Mollen family survived on turnips, beets and acorns, but kept their secret radio hooked up to a Gestapo power line. A true story of perseverence and triumph, Dixon’s novelistic family drama recalls the time the youngest Mollen girl had to have an abscessed tooth extracted without freezing and the time when the two youngest Mollens carried out their daring plan to ‘liberate’ coal from a moving train at night. Emboldened by BBC news, the Mollens ultimately return to the empty shell of their house.

Jack Dixon of Victoria is an independent scholar who was primarily a professor of French Literature at the University of Winnipeg (1959-1990).

Born in Broadstairs, Kent, England in 1924, he came to Canada in 1952 having served as an R.A.F. pilot. He had joined the Royal Air Force as an apprentice at age sixteen and trained as an armourer. He later earned his pilot’s ‘wings’ in 1945 as the war in the Far East ended. Obtaining his release in 1948, Dixon studied in France for a year before going to Merton College Oxford, where he graduated with an Honours degree in Modern Languages.

After immigrating to Canada in 1952, Dixon subsequently served as an R.C.A.F. security/intelligence officer (1953-58) prior to his academic career. He met his wife Rika in Vancouver in 1959. The couple moved to Winnipeg where he first taught at United College as a lecturer in French. It later became the University of Winnipeg. Jack Dixon gained his Ph.D at Stanford and taught in Winnipeg until his retirement in 1991.

Dowding and Churchill. The Dark Side of the Battle of Britain (Barnsley UK, Pen and Sword, 2009) second printing. To be re-issued in revised edition as a paperback in February 2016.

The Literary Culture of France. A collection of studies by 17 writers of five countries, from 1867-1964, addressing the themes of the essential character and permanent values of French literature from the Earliest Times to the Present. (New English Review Press, 2013.)