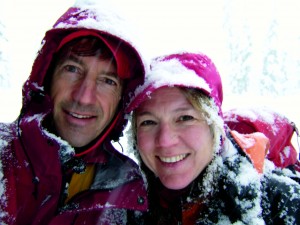 John Baldwin and Linda Bily will be doing a slide show presentation and signing books in Vancouver on Tuesday October 27th in conjunction with the Alpine Club of Canada in the Floral Hall at the VanDusen Gardens (5251 Oak Street) at 7:30pm. John Baldwin, a Vancouver mountaineer and nature photographer with over 250 first ascents to his credit over a forty-year period, has pioneered more than a dozen long ski traverses in remote areas of the Coast Mountains, having literally skied from Bella Coola to Vancouver.  Now he has co-authored Soul of Wilderness (Harbour $36.95) with Linda Bily, their collection of 166 full colour photos and essays featuring the wild beauty of western British Columbia and Alaska.  Baldwin has previously written Exploring the Coast Mountains on Skis, Backcountry Whistler and Mountains of the Coast: Photographs of Remote Corners of the Coast Mountains, shortlisted for the Bill Duthie Booksellers’ Choice Award in 1999. His photographs have appeared in numerous publications, including Beautiful British Columbia, Climbing, Powder, and Sierra. When not climbing mountains he works as a researcher in civil engineering at the University of British Columbia.

Photographer and environmental engineer Linda Bily has completed over fifteen long ski mountaineering traverses and her photographs have been published in a wide variety of magazines, catalogues and displays.

The duo travelled exclusively by foot and ski, exploring remote places that included both high meadows and snow-covered peaks.