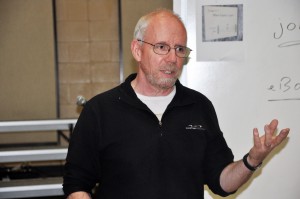 In Broken Arrow (Orca $10.95) Steve’s plan for a relaxing vacation under the Spanish sun with his friend Laia, ends abruptly when he receives an email from his brother linking their grandfather to shadowy international plots involving nuclear bombs. Was Steve’s grandpa a cold war era spy? In a desperate attempt to find out, Steve and Laia crack mysterious codes, confront violent Russian mobsters, dodge spies, unearth a bomb and avoid nudists. The deeper they look, the more Steve begins to wonder, whose side was Grandpa on?

In Wilson’s follow up, The Missing Skull (Orca $9.95), Steve is none too thrilled to be visiting his grandfather at a remote lake in northern Ontario. He resents the fact that his twin brother, DJ, got to go to Central America instead. However, things become interesting when his Grandpa offers up the unsolved death of Tom Thomson and his stolen skull. This is a mystery suited for aspiring detective Steve as he follows a trail of clues set up by his Grandpa in a game of intrigue that leads to Steve’s own adventure. 978-1-45981-1584