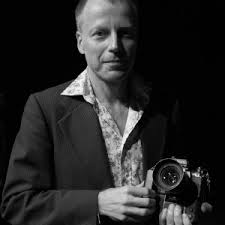 Created and performed by Volker Gerling

Life affirming. Enthralling. Considerate. In our new, soul-destroying, high tech climate of resentment, fear and spurious hate speech, Volker Gerling’s gentle, one-man presentation Portraits in Motion is a tonic—like a house guest who knows exactly how long to stay and what to say.

At just 65 minutes, Portraits in Motion is a celebration of intimacy in the form of “flipbook” documentary photos—mainly close-up portraits of newly-befriended strangers—interspersed with Gerling’s often humorous but never self-glorifying, live narration.

Each mini-movie consists of 36 photographic images that were taken in twelve seconds with his loud, shutter-clicking camera. Gerling explains to us that the old fashioned noise of his non-digital camera serves to keep his subjects from being able to fake or disguise their reactions. His is a rare show that is absolutely devoid of phoniness. He shows us the camera he uses. He takes 36 photos of the audience so we can experience exactly what his subjects have experienced.

Most people will assume it’s the close-up imagery of people’s faces on the screen that keeps them entertained. They’ll go home and talk about the content of those black & white mini-movies seen on a large screen, centre stage. But the well-honed precision of Gerling’s writing and sidelong narration is equally galvanizing. Every second of Portraits in Motion is respectfully intentional. He is not ad-libbing.

Most subjects for his three-to-five-second movies are strangers that Gerling has befriended in his travels. To gather his content, like some European monk in sensible shoes, Gerling, a Berliner, started going on long walking tours, equipped with some ‘flipbooks’ to show to people he met, usually carrying very little money, relying on the proverbial kindness of strangers. He takes pains to never describe these pilgrimages into the forests of mankind as any form of self-inflationary heroism. Instead, his classic Tarot card would be the fool.

For his PuSh Fest performances—alas, only three of them—he places each new flipbook sequence beneath an old school overhead projector in the same way a biology teacher might have instructed his class in 1968. Akin to a casino dealer shuffling cards, he proceeds to physically present each ‘mini-movie’ sequence with his thumbs. We can hear the pack of 36 thick cards cascading in his hands in rapid succession as we gaze at the screen.

We are transfixed by this hand-made theatre. There is a complete lack of artifice at play. Gerling is sharing faces. Invariably the changes in expression are miniscule, subtle and yet beguiling. We like nearly all of these people. The fat boy who is thrilled to be chosen for his five seconds of fame instead of his pals. The gregarious woman at the bar who quickly takes off her sweater to reveal her breasts. The tragedy-burdened old man who reveals the depth of his sorrow with just a twitch. And, hey, there’s Vancouver writer Michael Turner in the mix of portraits…

THIS is what people really are. They are vulnerable. They are shy. And they are mostly very good.

After 3,000 miles of walking, mainly in Germany, spread over ten years, and after performing his ‘thumb theatre’ in sixteen countries since 2005, Gerling now realizes his itinerant art of making unscripted flipbook movies is akin to the origins of cinema “when projectionists would move from town to town and there were no movie theatres.”

As we watch Gerling’s subjects abandon the poses they first assumed, we are gifted with a degree of refined intimacy that has become increasingly rare in the nauseating onslaught of cynical Hollywood movies fuelled by violence and CGI and minimal dialogue to encourage sales. In contrast, with a sophistication born of kindness, Portraits in Motion is artifice-free theatre/cinema/performance art that makes us feel glad to be human.

Hats off to PuSh for bringing a performance of this refined calibre to Vancouver.