The true north origins of B.C.

Liard Basin is more foreign than Games of Thrones. 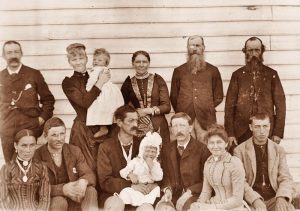 These are some of the Europeans who were at Fort Simpson in the Liard Basin in 1892. HBC N7535

Anthony Kenyon’s The Recorded History of the Liard Basin 1790-1910: Where British Columbia Joins the Yukon and N.W.T. is a 500-page reminder that B.C. was also born as a political construct from the north.

The Liard Basin extends north into the Yukon and the North West Territory and includes 20% of the landmass of British Columbia. It gave rise to Fort Nelson, Fort Liard, Fort Simpson and Dease Lake. Anthony Kenyon’s The Recorded History of the Liard Basin 1790-1910, Where British Columbia Joins the Yukon and N.W.T. is a definitive history written for both local readers and the academic community. This unprecedented book is reviewed by George Szasz.

The Recorded History of the Liard Basin 1790-1910 contains 29 chapters, illustrated with maps, archival documents and portraits of many of the chief characters. It includes name lists, biographies, extensive references, vocabularies, a bibliography and an in-depth index. The first two chapters set the stage: a summary of world and North American events that resulted in Scots, French and Aboriginals working closely together in the Liard Basin. The Europeans were focussed on the lucrative fur trade. ABOUT THE AUTHOR: After many years of research, Dr. Anthony Kenyon has self-published The Recorded History of the Liard Basin 1790-1910. Born and raised in England, Kenyon graduated in medicine at Cambridge University (1958 and married in 1959 after finishing his internship. He then worked for three years in  hospitals in Central Africa and his wife worked in the Central African Mail when they were not in small bush stations. He completed his surgical training in the UK and Canada intending to return to Africa. In 1966 he arrived in Fort Nelson with his wife and three-year-old daughter to take on a four-month locum in the area. The resident physician, Dr. Damian Metten, offered a partnership in the clinic, whereupon his four months of locum stretched to forty years of practice. A few years before Dr. Kenyon’s arrival the famous “Ma” Murray (Margaret  Murray) started a newspaper, The Fort Nelson News. After the subsequent editor Bob (R.L.) Angus died in 1974, the Kenyons bought the paper. As Fort Nelson increasingly became a transportation hub and a regional centre for an area rich in natural resources, Dr. Kenyon became interested in the history of the area, particulary in the community’s bicentenary year of 2005 when he presented a paper to the Fort Nelson Historical Society about the first community to use the name Fort Nelson, as far back as 1805. In Kenyon’s research of the region’s history he found mistakes copied forward from one author to the next. He went back to original writings and found a remarkable amount of records written by the first European pioneers as far back as 1790, portraying in detail, themselves, their workers, and the aboriginal people who had lived there for eleven thousand years.