12 Rules for Life: An Antidote to Chaos
by Jordan B. Peterson 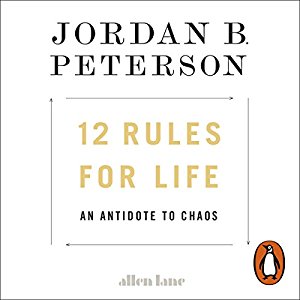 Controversial University of Toronto psychologist and cultural critic Jordan Peterson, condemned by Maclean’s as “the stupid man’s smart person,” has spoken to sold-out audiences at UBC twice recently, on November 3 at the Chan Centre and on February 15 at the Freddie Wood Theatre. He will be back to speak at Vancouver’s Orpheum Theatre on June 23, in a debate with Sam Harris. Our reviewer Ron Dart, wondering what all the fuss is about, reviews Peterson’s Canadian and international bestseller 12 Rules for Life: An Antidote to Chaos, in advance of Jordan Peterson’s return to B.C.– Ed

From now on, everybody stands on his own feet.

I may assert Eternal Providence,
And justify the ways of God to men.

I remember with much clarity and chagrin the publishing in 1987 (more than 30 years ago, when I was doing my PhD studies) of Allan Bloom’s The Closing of the American Mind: How Higher Education has Failed Democracy and Impoverished the Souls of Today’s Students.

The reactions on the liberal and progressive left to the well-written tome were swift, pointed, and sometimes sheer attack. Bloom had merely highlighted, in his layered beauty, how the western canon of literature had become dim and caricatured in higher education and how, as a result, the American mind was closing in on itself within trendy texts and a narrow ideology.

The liberal left pilloried Bloom and castigated him as an apologist for the reactionary right (which, of course, he was not). Those who only think within the dualistic categories of liberal left and conservative right do not know how to engage those who transcend such simplistic tribes.

It is also significant that Emmanuel Goldstein and the Brotherhood (whether he or they actually existed) were seen as the enemies of Big Brother in Orwell’s 1984. Sadly so, there tends to be often an Orthodoxy, whether religious or secular or some combination thereof, that defines who is in the establishment Orthodox clan and who are the heterodox and heretics.

Those who are attentive to and alert to some of the larger contemporary issues of political correctness in the culture wars cannot but be acutely aware of the presence of Jordan Peterson.

The recent front stage reality of Peterson’s significance (Bill C-16, the Lindsay Shepherd incident, and his interview with Cathy Newman are but three in a longer list of public incidences) has clarified Peterson’s heterodox or heretical positions before the Orthodox liberal clan.

The reactions to Peterson are virtually identical to the way Bloom and Goldstein were treated—many are the déjà vu moments in the historical pattern of cultural clashes. But, for those who only think in a dualistic rather than a more nuanced and dialectical way, Peterson is either the pre-eminent saint or a sinner. His writings are either hagiographical texts boosted by uncritical fans, or he is demonized by his knockers and critics.

Are there more nuanced and subtle ways of reading and approaching Peterson’s all too human role in this cultural drama of sorts without slipping into a sheer and unhelpful and unhealthy intellectual melodrama?

The publication early in 2018 of Peterson’s 12 Rules for Life: An Antidote to Chaos has, predictably, drawn forth the “two minutes of hate” liberal tribe (who seem none too liberal, their tolerance quickly dissipating like a cloud) and the pro-Peterson group think-clan (who are equally reactionary merely from the opposite end of the political and cultural perspective). 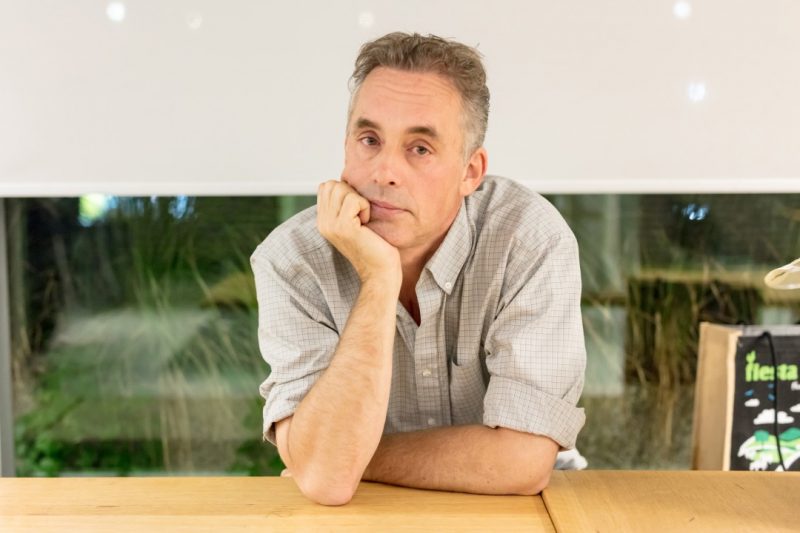 Those who focus exclusively on 12 Rules for Life fail to see such a primer as merely a portal into Peterson’s more substantive corpus of life and writings, and they tend to miss what Peterson is saying and doing in his larger work. He is mapping meaning, myths, and transformation. Tolstoy wrote his children stories, Hesse his fairy tales, and Jesus told his parables.

Do these abbreviated approaches to important traditions of insight and wisdom define the fullness and maturity of such views of life? Of course not! 12 Rules for Life are, in many ways, compact maxims gleaned from life that can and do speak to those who have ears to hear. Do such rules or guidelines explain or exhaustively comprehend the more layered and finely textured nature of the human journey? Of course not.

Those who are more curious and keen to delve and dig deeper into Peterson’s more refined and thoughtful approach to making sense of the human journey should take the time to thoroughly immerse themselves in his more packed and demanding classic of sorts, Maps of Meaning: The Architecture of Belief (Routledge, 1999).

There has certainly in the last 200 years been an interest in myths, fables, fairy tales, parables, epic literature, sacred dramas, and many similar genres as means of mapping the human journey to meaning and order, to the known and unknown, to decisions and consequences, to paths worth taking and paths that go to cul-de-sacs.

Maps of Meaning and, to a much lesser extent, 12 Rules for Living (in a more populist way and manner), stand within such a genre. Peterson’s metaphors offered in these books are meant, in many ways, like the kōans of Zen Buddism, to reveal much about the layered nature of the human journey.

Do such tales told and pondered answer all the troubling questions of life? Of course not! They do point, though, to ways to living into life in a more meaningful manner the tragedies, uncertainties, unpredictability, and foiled expectations that are part of any human pilgrimage through time.

If nothing else, 12 Rules for Living is about revealing these tentative pathways and acting on accepted wisdom so as not to be paralysed by cynicism, scepticism, or the slings and arrows of misfortune.

I need not list the twelve rules. The internet provides Peterson’s rules with extended and pithy reflections on each. Perhaps the language of rules could be replaced by pointers or pathways — but this is a secondary quibble. In many ways they are less about rules and more about self-understanding and the means to understand one’s deeper and truer self—a sort of Socratic “Know Yourself” or Christian “Love Your Neighbour as Yourself.”

There are many ways we can deceive, distract, and distort more meaningful notions of a more genuine self, and Maps of Meaning (to a greater extent) and 12 Rules for Life (to a lesser extent), like a well sharpened knife, cut away all excess so that what is needed is tasted well and wisely. Peterson has certainly not been shy in the last few years in posting his multiple insights on blogs, videos and much else — those keen to get a more animated and compact version of the 12 Rules need only tap in on their computer keyboard a variety of interviews Peterson has done on this book.

There is no doubt that Peterson has been savaged by the trendy left and, to a greater or lesser extent, adopted and embraced by variations of the crude and more moderate right. Peterson tends to be too nimble of thought and mind to be taken captive in either cage.

The Christian religious community have not been quite sure what to do with Peterson. His many lectures on the Bible (a comprehensive series on a mythical reading of Genesis) has appealed to some Christians, but his seeming lack of a theological discussion of the Christian Divine seems to offend them.

It seems to me that Peterson has enough humility (unlike Milton) not to try to “justify the ways of God to men” and like Merton he realizes, without being naïve or unduly Pelagian or Arminian, that we all need to learn to “stand on our own feet.” How is such a standing to be done and how are humans to use their freedom well and wisely to not only stand but walk and run, ramble and climb to fine ridges and summits on our feet?

12 Rules for Life is but a primer on how, in a probing and thoughtful way, men and women can face into their fears and insecurities, clarify their reasons for not being who they might be, and then acting in a mature way and manner to become finer and fitter people for the journey.

Does this mean 12 Rules for Life is the definitive answer to the deeper inner issues or more troubling political, economic, and ecological issues of our age and ethos? Of course not! It’s certainly not a silver bullet or snake oil book that will magically solve the dilemmas of the human soul and society. It is a necessary but hardly a sufficient text for the tougher questions that beset us on our all too human journey and should be read as such.

Something is better than nothing, and when the something of 12 Rules for Life is read in a thoughtful manner, weighing the pro and contra on the scales of thought, the primer does have its limited role to play. A thoughtful reader need not either uncritically genuflect to the book — there are finer works of literature that are much more mature — or simply trash the book, which is infantile and reactionary. The task, simply put, is to see Peterson’s missive for what it tentatively offers, and to put it aside when it ceases to serve a meaningful purpose.

I would encourage one and all to purchase, read, and inwardly digest 12 Rules for Life: An Antidote for Chaos. But don’t stop there. Embark as well on Maps of Meaning: The Architecture of Belief and read both books reflectively and in a discerning manner.

Having done so, then turn to some of the much more significant books that deal with myths, symbols, and maps of meaning and what they suggest for a more meaningful journey through our short time in history. But please avoid, as much as possible, slipping into an either-or way of thinking. The treatment of Bloom and Goldstein assure us there be dragons if we go to such places on an ancient yet ever-new map of meaning. 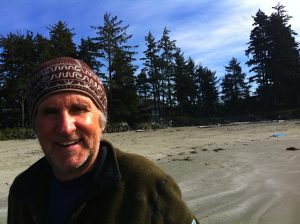 Ron Dart has taught in the Department of Political Science, Philosophy, and Religious Studies at University of the Fraser Valley since 1990. He was on staff with Amnesty International in the 1980s. Ron has published more than 35 books, his most recent being Erasmus: Wild Bird and The North American High Tory Tradition.