Ormsby #80: The sanity of diversity

"My goal was not to document the exotic other," says Wade Davis, recently returned to B.C. to teach anthropology. 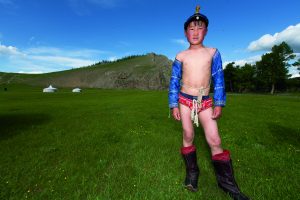 Among 140 remarkable photos in Wade Davis: Photographs is this Mongol boy in wrestling garb.

To say that Wade Davis has had an extraordinary, brilliant, and in the end very lucky career, says reviewer David Mattison, would be a great understatement.

This new book from acclaimed British Columbian explorer, ethnographer, botanist, writer, documentary photographer/cinematographer — and now UBC professor of anthropology — Wade Davis (http://www.wadedavis.com) provides a tiny yet diverse glimpse into the thousands of images he created while undertaking work on behalf of the National Geographic Society (NGS) as their Explorer-in-Residence from 2000 to 2013. Davis selected 140 photos from the thousands he created. Franz Boas, circa 1895, imitating a Kwakiutl ceremony to expel cannibals.

In his introduction, Davis provides a mini-history of anthropology, highlighting the work of the brilliant German-American anthropologist Franz Boas (1858-1942), who worked among coastal B.C. First Nations communities and directed the Jesup North Pacific Expedition of 1897 (for its photographic records see the American Museum of Natural History at https://anthro.amnh.org/jesup_photos).

I found it unusual that someone as knowledgeable as Davis does not, at least in this book, mention the close connection and utility of photography to these pioneering anthropologists. Boas was himself a photographer and hired commercial photographers to assist him. One of his most important Kwakwaka’wakw informants, the half-English and half-Tlingit George Hunt, was also an amateur photographer. Wade Davis: Photographs also serves as a useful primer on the significance of cultural anthropology and Davis provides an evocative summary (p. 20) of his primary mission during his Explorer-in-Residence years: A Dogon elder from the cliffs of the Bandiagara escarpment in Mali peers towards the lands of the Fulami, one of the many Muslim tribes that have threatened the cultural survival of his people for a thousand years. All large colour photos by Wade Davis. Young women at sunset on Marsabit Mountain in Kenya await warriors who will sing and dance for them, long into the night. Wade Davis has honed his speaking skills after scores of presentations. Lecture photo courtesy of D&M.