The rise of graphic novels in B.C.

The fastest growing genre in book publishing, the graphic novel, has a long history in B.C. 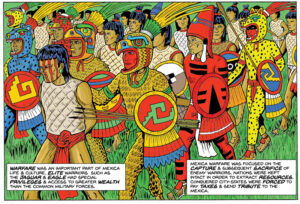 Early artists who combined drawings with words include Emily Carr who drew cartoons for Western Women’s Weekly in 1918 and Vernon Hope Miller who created the first Canadian comic book, “Better Comics” published in Vancouver in 1941.

After the text is completed, producing a graphic novel starts with an artist putting pencil to paper. The process can take a year or two, or several before the final book is ready to be published. Pencil sketches must be inked and perhaps painted on. Every artist does it a bit differently; some draw the word balloons and text by hand, others do the work using a computer. Whatever the method, the process is intense.

Graphic novels are the fastest growing genre in book publishing, with sales increasing every year. In 2020, the combined sales revenue of graphic novels/comics in North America was $1.28 billion.

Graphic novelists were preceded by comic artists and cartoonists, such as Emily Carr, who in 1918, drew cartoons for the Vancouver-based Western Women’s Weekly. The first Canadian comic book, Better Comics, was published in Vancouver in 1941 and marks its 80th aniversary this year. Better Comics was produced in response to a ban on the importation of American comics during the Second World War. Vancouver’s counter-culture weekly, Georgia Straight, in the late 1960s, played a major role in the development of comics by publishing Acidman by Peter ‘Zipp’ Almasy. Later, the Straight ran regular strips by the legendary Rand Holmes (Harold Hedd; Gay Comics) in the early 1970s, and the hilarious David Boswell (Reid Fleming, World’s Toughest Milkman) in the 1980s. The Straight was one of over 500 alternative newspapers that sprang up across North America in the 1960s giving cartoonists a forum to break free of traditional comic art and present a more subversive, sometimes disturbing view of the world. This explosion of expression led to the growth of underground comic books.

The term, “graphic novel” was first coined by Will Eisner for his 1978 book A Contract with God. Graphic novel now covers any kind of book of sequential art, whether an actual novel or non-fiction work. Art Spiegelman’s genre-defining Maus: A Survivor’s Tale won a Pultzer Prize in 1992. The award gave legitimacy to graphic novels both commercially and intellectually. In British Columbia., Harbour Publishing was an early supporter, releasing B.C.’s first graphic novel Now You’re Logging (1978) by Bus Griffiths. In 1995, New Star published The Green Shadow by Andrew Struthers. Arsenal Pulp Press has a growing list of social justice, LGBTQ, BIPOC titles and translated international works such as Blue Is the Warmest Color. In 2012, Arsenal published the seminal Escape to Gold Mountain: A Graphic History of the Chinese in North America by David H.T. Wong and The Anti-Capitalist Resistance Comic Book by Gord Hill. In 2014, Douglas & McIntyre published the innovative Red: A Haida Manga by Michael Nicoll Yahgulanaas with its combination of Japanese comic aesthetics and Indigenous formline art. And Victoria-based Orca Books has a vigorous ongoing series of graphic novels for middle-grade readers.

Political awareness made an impact on comic art in B.C. with She Named It Canada Because That’s What It Was Called (1971) created by The Corrective Collective, a Vancouver-based feminist group whose aim was to re-write Canadian history for a popular audience. The comic was 50 years ahead of its time by offering an alternative perspective on the development of colonial Canada. The comic was illustrated by Colette French and printed at Press Gang, going into four editions. B.C. comics and graphic novels got a boost in 1981 with Pork Roasts: 250 Feminist Cartoons, curated by Vancouver-based art historian Avis Lang Rosenberg for the UBC Fine Arts Gallery (now the Belkin Art Gallery). The exhibit included local artists Mary Schendlinger, Marian Lydbrooke, Jean Kamins, and Pat Davitt. The Pork Roasts comic book would go into two printings. Starting in 1999, artists Rob Dayton and Julian Lawrence published a series of comics under the title of Drippytown featuring Xero, Colin Upton, James Lloyd, Ted Dave and others. 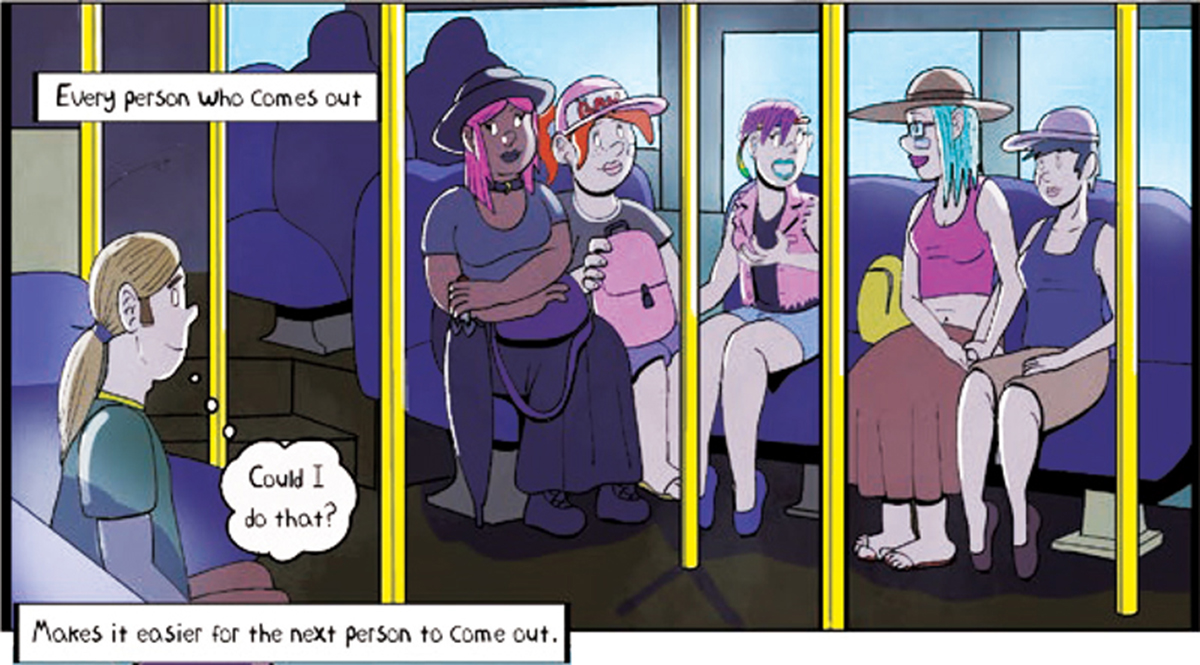 In 2007, Jeff Ellis and Jackie Klobukar co-founded the Vancouver-based, non-profit publisher Cloudscape Comics Society (original board members included Angela Melick, Leanne Riding, and Jonathon Dalton). One of the aims of Cloudscape was to support the work of local artists. The society has since published over 25 graphic novels and anthologies and given comic book classes and workshops. In 2017, Cloudscape embarked on a social justice project to illustrate the experiences of Canadian immigrants fleeing war, political strife and religious persecution. These comics were displayed at bus shelters in Vancouver as part of Comics in Transit.

The accessible nature of comics is a perfect fit with social justice. Enter the Graphic History Collective (GHC), formed in 2008 when a group of artists, writers and researchers lent their activist approach to comics. The GHC says their goal is to “produce alternative histories—people’s histories—in an accessible format to help people understand the historical roots of contemporary social issues. Our comics show that you don’t need a cape and a pair of tights to change the world.” GHC books include Drawn to Change: Graphic Histories of Working Class Struggle and 1919: A Graphic History of the Winnipeg General Strike. In 2008, almost three decades after the Pork Roasts exhibit, the Vancouver Art Gallery mounted KRAZY! The Delirious World of Anime, Comics, Video Games, & Art, a groundbreaking, international review of comic art, graphic novels and associated art. The exhibition catalogue was published by Douglas & McIntyre. At Camosun College, in 2012, Victoria husband and wife team Ken and Joan Steacy created the first post-secondary comics and graphic novel program in Canada (where graduates created and published their own 24-page comic, which they presented at the Camosun Comic Arts Festival). In 2019, Ken teamed up with Margaret Atwood to create the historic fictional comic series, War Bears, and Joan’s graphic memoir Aurora Borealice won the Sequential Award for best graphic novel. Together they create edutainment; entertaining comics in service of education, instruction, and advocacy, and are now working with Indigenous organizations. 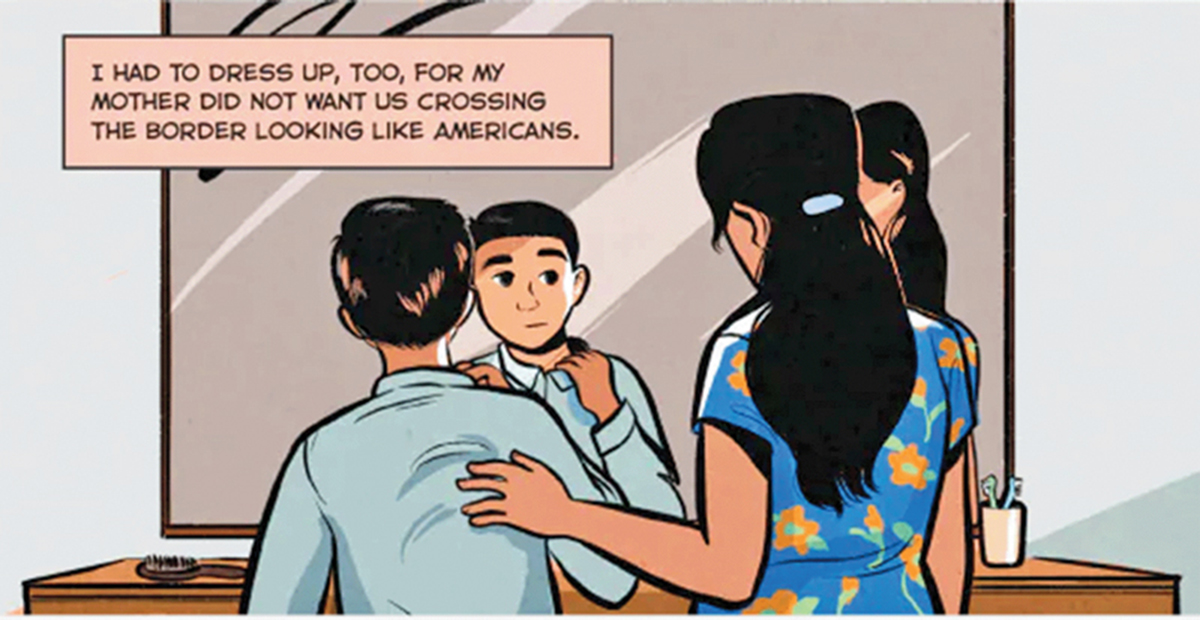 Over the past few decades, evidence of a growing community of graphic novelists and the wider acceptance of graphic novels can be seen on a number of fronts. The Vancouver Comic Arts Festival (VANCAF), an annual two-day celebration, has been going strong since 2012. The academic world has also stepped up with UBC, SFU, Langara Collage, Emily Carr University of Art + Design and the University of Northern B.C. all offering courses on graphic novels. And in 2017, the Vancouver Public Library’s Writer in Residence was, for the first time, a graphic novelist: Miriam Libicki who created Toward a Hot Jew, named one of 2016’s top 10 graphic novels by Forbes magazine.

• Borders (HarperCollins $21.99) by Natasha Donovan, a Métis illustrator originally from Vancouver has teamed up with Thomas King to adapt one of King’s short stories about a mother and son road trip that involves crossing the U.S.– Canada border. When the pair answer “Blackfoot” to the border guard’s question as to their nationality, they find themselves in limbo, unable to go north or south.

• Shadow Life (First Second $24.99) by poet and novelist Hiromi Goto with art by Ann Xu follows a seventy-six-year-old mother whose well-meaning daughters place her in an assisted living home. But she would rather be in her own apartment. Shadow life questions institutionalized eldercare and memories of Japanese internment camps.

• In The Monster Sisters & the Mystery of the Stone Octopus by Gareth Gaudin (Orca $19.95), sleuthing sisters Enid and Lyra use their city’s archives and consult local booksellers to uncover a conspiracy spanning centuries and unruly monsters (for ages 9-12).

• Eleven years after its original publication, The 500 Years of Indigenous Resistance Comic Book (Arsenal Pulp $19.95) by Gord Hill has been relaunched in a full-colour, revised and expanded edition. This ground-breaking opus covers the history of Indigenous activism and struggle from contact to present day.

• Kristina Luu of Vancouver has illustrated Besties: Work It Out (Etch/Clarion $12.99) written by Kayla Miller and Jeffrey Canino. The story, for ages 8-12, follows entrepreneurs Beth and Chanda as they navigate a dog-sitting job. Kristina Luu’s art has also been published in LGBTQ+ comic anthologies.

• Pearl Low has illustrated Vampires Don’t Wear Polka Dots (Scholastic $22.99) by Marcia Thornton Jones and Debbie Dadey (for ages 7 to 10). The third graders at Bailey Elementary are so hard to handle that all of their teachers quit except the new teacher who has just arrived from Transylvania. Low’s art is rooted in Chinese-Canadian and Caribbean-Canadian experiences. In 2020, she won an Academy Award for her film Hair Love.

• Set in Victoria’s James Bay neighbourhood, Painted Fences by Sara Cassidy, with art by Sydney Barnes (Heritage House $19.95) depicts a child’s eye view of life during World War Two by cutting between the present and the past to tell a poignant story.

• Coming Out, Again: Transition Stories (UBC Press $30.95) by Sabrina Symington is an empowering graphic novel exploring identity and how it can change over time. Lily comes out as a lesbian after coming out as a trans woman. Leanne embraces their genderqueer identity in later life. Ty navigates their queerness with their autistic identity.

Good-bye Marianne: A Story of Growing Up in Nazi Germany by Irene Watts, illustrated by Kathryn E. Shoemaker (Tundra Books, 1998).

Tangles: A Story About Alzheimer’s, My Mother and Me by Sarah Leavitt (Freehand Books, 2010). A feature-length animated film of Tangles is in the works.

Lords of Death and Life by Jonathon Dalton (Lost City, 2010).

May Day: A Graphic History of Protest (Between the Lines, 2012) by Robin Folvik, Sean Carleton, and Mark Leier. Illustrated by Sam Bradd and Trevor McKilligan.

Kicking at the Darkness by Colin Upton (Holocaust Education Centre, 2016).

The Monster Sisters and the Mystery of the Stone Octopus by Gareth Gaudin (Orca, 2021). Painted Fences by Sara Cassidy, illustrated by Sydney Barnes (Heritage House, 2021).