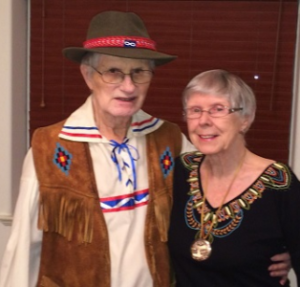 Métis activists and authors, George and Terry Goulet (at right) have published their fourth book about Métis people, Along the Métis Trail: Métis History, Heritage, and Culture (FabJob $24.95). This new title provides an up-to-date portrayal of the history, heritage and culture of the Métis People from the late 1700s to 2022 with research the authors have assembled over the past quarter of a century.

In 1816, the Métis were first recognized as a new Canadian Indigenous nation. The historical Métis in the fur trade intermarried with native women. The Indigenous Métis offspring from these unions inherited cultural and other traits from both their First Nations and European ancestors. This new Nation of Métis were distinct and had their own Indigenous identity. They played an important role in the early exploration and development of western Canada.

Their history is replete with remarkable personalities and with memorable events such as the Battle of Seven Oaks, the Sayer Trial over free trade, the Red River Resistance, the North West Uprising, the Manitoba Métis Federation Inc. Case, the Daniels Case as well as other events and court cases. 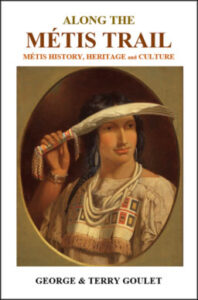 On April 17, 1982 Canada’s Constitution was repatriated under the Canadian Constitution Act, 1982. For the first time, the Métis were officially recognized as an Aboriginal (also known as Indigenous) rights-bearing People. The Charter of Rights and Freedoms and section 35 thereof together with other sections of the Canadian Constitution Act, 1982 provide the Métis with the framework for their individual and organizational Indigenous rights and fundamental freedoms.

More information about the book, and how to purchase a copy, can be found at this link: https://fabjob.com/program/along-metis-trail/

Born in St. Boniface in 1933, George R.D. Goulet was the fifth of eight children who are descendants of early French Canadian settlers. He attended St. Paul’s High School in Winnipeg, gained a law degree at University of Manitoba, then a Master of Laws degree from the University of Toronto. He is the lone author of The Trial of Louis Riel: Justice and Mercy Denied. Other titles have been co-authored with his wife.

Born in Calgary in 1934, Sechelt-based Métis scholar Marie Therese Veronica “Terry” Goulet (nee Boyer de la Giroday) received a BSc (HEc) degree from the University of Manitoba. The couple has co-authored the independently published titles The Métis: Memorable Events and Memorable Personalities and The Métis in British Columbia: From Fur Trade Outposts to Colony. The latter was sponsored by the Métis Nation of British Columbia as a BC 150 project. It was officially released at the AGM of the Métis Nation of British Columbia in September 2008.

The University of Calgary has established the annual George and Terry Goulet Bursary in Canadian History in their honour. The Goulets are strong proponents for the exoneration of Louis Riel.

One Response to “The mighty Métis”